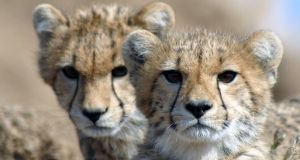 Scientists estimate that just 7,100 of the fleet-footed cats remain in the wild, occupying just 9 per cent of the territory they once lived in. Photograph: Sarah Durant/ZSL/PA Wire

Urgent action is needed to stop the cheetah — the world’s fastest land animal — sprinting to extinction, experts have warned.

Scientists estimate that just 7,100 of the fleet-footed cats remain in the wild, occupying just 9 per cent of the territory they once lived in.

Asiatic populations have been hit the hardest with fewer than 50 individuals surviving in Iran, according to a new investigation led by the Zoological Society of London (ZSL) and Wildlife Conservation Society (WCS).

In Zimbabwe, cheetah numbers have plummeted by 85 per cent in little more than a decade.

The cheetah’s dramatic decline has now prompted calls for the animal’s status to be upgraded from “vulnerable” to “endangered” on the International Union for the Conservation of Nature (IUCN) Red List of threatened species.

Dr Sarah Durant, from ZSL and WCS, project leader for the Rangewide Conservation Programme for Cheetah and African Wild Dog, said: “This study represents the most comprehensive analysis of cheetah status to date.

“Given the secretive nature of this elusive cat, it has been difficult to gather hard information on the species, leading to its plight being overlooked. Our findings show that the large space requirements for cheetah, coupled with the complex range of threats faced by the species in the wild, mean that it is likely to be much more vulnerable to extinction than was previously thought.”

The cheetah is one of the world’s most wide-ranging carnivores and needs a lot of space. Partly because of this, 77 per cent of its remaining habitat falls outside protected areas, leaving the animal especially vulnerable to human impacts.

Even within well-managed parks and reserves the cats have suffered as a result of humans hunting their prey, habitat loss, illegal trafficking of cheetah parts, and the exotic pet trade, say the researchers writing in the journal Proceedings of the National Academy of Sciences.

In Zimbabwe these pressures have seen the cheetah population plunge from 1,200 to a maximum of only 170 animals in 16 years, a decline of 85 per cent.

The experts want to see a completely new approach to cheetah conservation focusing on the landscape that transcends national borders and incorporates co-ordinated regional strategies.

It would involve motivating both governments and local communities to protect the cheetah and promoting the sustainable co-existence of humans and wildlife.

Dr Kim Young-Overton, from the wild cat conservation organisation Panthera, said: “We’ve just hit the reset button in our understanding of how close cheetahs are to extinction.

“The take-away from this pinnacle study is that securing protected areas alone is not enough. We must think bigger, conserving across the mosaic of protected and unprotected landscapes that these far-reaching cats inhabit, If we are to avert the otherwise certain loss of the cheetah forever.”