Scientists are . . . unkempt, ageing and boring?

The image people have of a ‘scientist’ has changed since the 1950s, but some stereotypes are stubbornly persistent 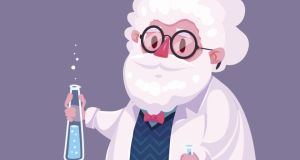 Long before the word “scientist” was coined, the scientist was often the subject of caricature. In Gulliver’s Travels by Jonathan Swift, Gulliver visited the Academy of Lagado (thought to be a lampooning of the Royal Society). There he found the academicians to be unkempt and distracted. Sporting beards and ragged clothes, locked inside and utterly divorced from the real needs of the impoverished Laputan society, they concocted plans for “extracting sunbeams out of cucumbers”, “an operation to reduce human excrement to its original food” and even “a scheme for entirely abolishing all words whatsoever”.

We can picture the men Gulliver described through Swift’s prose but also because there is considerable continuity in the popular image of a scientist from the 18th century up to the present.

Social scientists have been very interested in how people develop their ideas about what a scientist is and does. A classic study was co-authored in 1957 by the anthropologists Margaret Mead and Rhoda Métraux. Mead was more famous for her studies of sexuality in South Pacific and southeast Asian societies, and Métraux for her work on Haitian Voodoo practices. Yet their extensive survey of 35,000 high school students, asking the students about their attitudes to science and scientists, has also been highly influential.

The image of the scientist that emerged from the 35,000 essays that Mead and Métraux collated is familiar. They constructed what they termed “composite essays” for the prompts. That is, they took the repeated themes and phrases of thousands of responses and tried to summarise them in single phrases. They compared the process to making up a composite photograph of many individual photographs. The composite scientist was “a man who wears a white coat and works in a laboratory”. Elderly or middle-aged and wearing glasses, he was often described as “unshaven and unkempt”. He was surrounded by laboratory equipment and spent his day doing experiments. Although intelligent, he was thought to neglect his family, to have no other interests aside from science and to be boring. As the questions suggest, few respondents imagined the scientist as a woman. At least as interesting, few imagined the scientist outside or working with living things: a scientist was surrounded by test tubes and chemicals.

Despite the recognisable stereotype, there were many positive and often heroic associations made with the scientific life. Scientists were viewed as centrally important to society, as potential saviours as well as potential destroyers. In the US after the second World War, the science of war loomed large: Albert Einstein and J Robert Oppenheimer were prominent among the scientist-heroes mentioned. Scientists were described as making life better and possibly protecting the nation.

Mead and Métraux’s were concerned with how the image of the scientist might deter students from pursuing careers in science. Girls were “a principal untapped source of technical skill”. Even boys might not be attracted to science because the hero-scientist pursued a demanding, potentially dangerous career that might not be compatible with a happy family life.

Such ideas appear to change only slowly. In 1983, David Chambers devised the draw-a-scientist test to see how prevalent the stereotypical scientist was. Despite the sexual revolution, only 28 out of almost 5,000 drawings Chambers analysed featured a female scientist. The male scientist was still inside, wearing a labcoat and glasses and mostly engaged with test tubes. An unscientific litmus test of Google Images suggests that perhaps our scientist stereotype has begun to embrace women, but the poor scientist cannot get out of the lab, the white coat or too far away from test tubes.