Annual show with 550 research projects set to attract 50,000 visitors to RDS in Dublin 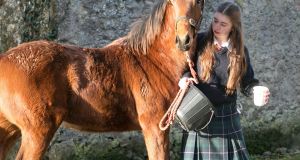 Olivia Buckley from John The Baptist Community School in Limerick investigated whether yoghurt is good for foals. Photograph: Liam Burke/Press 22 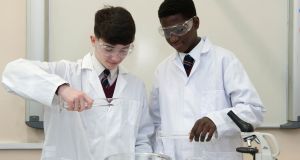 Leon Browne and Victor Akinsowon from Coláiste Chú Chulainn who did research on the use of nappy technology in flood defences. Photograph: Liam Burke/Press 22

A foal that has a taste for yogurt and flood control using a modified nappy are just two of the 550 research projects to be presented at the forthcoming BT Young Scientist and Technology Exhibition taking place from January 10th at the RDS.

Now in its 53rd year, the annual event always manages to impress with research projects in social and behavioural sciences, the general sciences, maths and technology.

Finding out whether yoghurt is as good for young horses as it is for young students is what drove a project by Olivia Buckley, a transition year student at John The Baptist Community School in Barrysfarm, Hospital, Co Limerick.

She had been conducting similar research with calves, discovering that bread and other bakery products were well suited to a calf’s digestive system. This encouraged her to look at the nutrients important for horses, and she found things were missing from the horse’s everyday diet.

And so a project was born, to see whether including natural yogurt in a horse’s diet could improve its condition.

“So I began to feed a four-month-old National Hunt foal – bred by the sire Ask - natural yogurt in his daily diet,” she says.

She monitored the animal’s progress, studying its coat, hooves and overall mass. “I also compared his growth rates to those of the average thoroughbred foal at four, five and six months to judge how they compared to the average.”

She found the foal’s overall condition improved during the trial and its growth rates were above average for a foal. In effect she found the foal was “completely thriving”.

Students Victor Akinsowon and Leon Browne undertook research of a very different kind, seeing whether they could come up with a completely new take on using sandbags as flood barriers.

The two third-year students from Coláiste Chú Chulainn in Dundalk got the idea for their project after participating in a global experiment on water conducted by the Royal Society of Chemistry. This involved the study of polymers, complex long-chain molecules found in plastics and other products – including nappies.

They decided to build on these ideas, focusing their research on investigating the use of polymers and hydrogels as an alternative to sandbags in flood defences.

They came up with a new product they call a “hydrobag”. Hydrogels are highly absorptive and hold water and are an essential ingredient in the typical disposable nappy and in wound dressings.

They reapplied the hydrogel in a novel way to deliver a new product that can be used to protect against flooding.

Their school opened in 2014, and now Victor and Leon will become the first representatives of the school to have a project in the exhibition.

This year more than 2,000 projects were submitted for consideration so the 550 that will be on display at the RDS will be of a very high quality, the organisers say.

There is also a line-up of impressive live shows including mentalist David Meade, the World of Robots and also a visit by Titan the Robot.

As usual, the girls outnumber the boys with 61 per cent of the participants female and 39 per cent male.

The exhibition is a perennial favourite and will attract about 50,000 visitors this year over the three days on which it is open to the public: from Thursday January 12th through Saturday January 14th. Tickets cost €6 for students, €12 for adults and €25 for family passes that include two adults and two children.

Visitors can download a free app to guide them through the exhibition, and full details about the exhibition are available at btyoungscientist.com