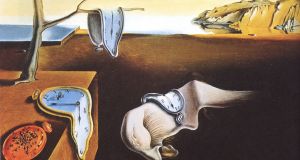 Detail of The Persistence of Memory (1931), by Salvador Dalí, who may have suffered from Parkinson’s disease

Some of the most famous artists in history may have left subtle clues to brain disease in their work, researchers claim.

Groundbreaking analysis of the brushstrokes of the likes of Salvador Dalí and Pablo Picasso is shining a light on how degenerative illness can be spotted years before other life-changing symptoms come to the fore.

Experts at Maynooth University in Ireland and the University of Liverpool believe that the researchers’ insights may lead to new studies which could ultimately help diagnose the early stages of Alzheimer’s and Parkinson’s diseases.

Some 2,092 paintings by seven artists were digitally stripped to black and white in a bid to uncover changing patterns and structures in the works and draw a true picture of their health.

“Identifying changes in someone’s behaviour that can predict clinical diagnoses years later is very challenging. However, this data suggests that it could be possible to identify changes in the structure of a painting many years before the diagnosis of a neurological disorder,” he said.

The work of Dalí and Norval Morrisseau, who are believed to have suffered from Parkinson’s disease, and James Brooks and Willem De Kooning, who had Alzheimer’s, was analysed alongside paintings by Picasso, Marc Chagall and Claude Monet, who suffered no degenerative brain illness.

The decoding revealed that the artistic structures used by those with brain disease changed as they got older, becoming less complex.

Scientists believe the discovery is similar to the way the deteriorating health of a politician or writer can be spotted, as was the case with US president Ronald Reagan years before he was diagnosed with Alzheimer’s.

The research, published in the Neuropsychology journal, found no simplification in patterns and structures used by artists who aged without degenerative brain disease.

Dr Alex Forsythe, from the University of Liverpool’s school of psychology, said: “Art has long been embraced by psychologists as an effective method of improving the quality of life for those persons living with cognitive disorders. We have built on this tradition by unpicking artists’ ‘handwriting’ through the analysis of their individual connection with the brush and paint. This process offers the potential for the detection of emerging neurological problems.”