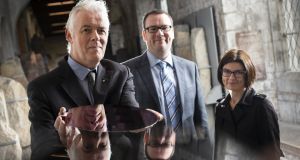 Some of the winners of the Bridge Network Invention of the Year Awards: Prof Cian Ó Mathúna; Dr Kieran Meade and Aleksandra Augustyniak. Photograph: Cathal Noonan

The scientists responsible for inventions that could make the world stage and solve “key challenges in today’s society” have been honoured by University College Cork’s 2018 Bridge Network Awards.

The UCC life sciences invention of the year went to Dr Mark Tangney, Dr Ian Curtin and Stephen Buckley of UCC college of medicine and health for new imaging technology that could make it “dramatically more affordable”.

The “BioBind” imaging system could be particularly useful in cancer diagnostics and life sciences research and rapidly accelerate research in even small laboratories.

Prof Cian Ó Mathúna and the Tyndall National Institute won the UCC ICT invention of the year award for a magnetics invention that improves the battery life of mobile devices.

“The innovation has global significance, solving one of the biggest limitations” currently facing batteries, according to Prof Ó Mathúna. Already, it has been licensed to three major multinationals.

Dr Derry Fitzgerald, whose spin-out company AudiosourceRE is based at Cork Institute of Technology Rubicon Incubation Centre, won the CIT ICT invention of the year award for so-called “sound-separating” technology.

So far, it has been used to remaster music such as the Beach Boys’ Good Vibrations album and is currently being deployed by Capitol Records and others in the audio industry to remaster music.

The IT Tralee invention of the year was awarded to Dr Helena McMahon and Dr Aleksandra Augustyniak for a skin-ageing treatment, “NutraECM solution”. An oral, or topical treatment, it targets both collagen and elastin production. However, it could have far more extensive uses, since the researchers believe that it could be used for cartilage and bone regeneration.

The Teagasc invention of the year award was given to a team led by Dr Kieran Meade of Teagasc, Dr Ciarán Harte and Prof Ed Lavelle (both of TCD) for their new “neonatal vaccination solution”. Their patent-pending innovation will improve immunity in neonates (infants in the first weeks and months of life).

The vaccine can also be given to calves, which in the first six months of their lives are highly susceptible to infectious diseases due to having an underdeveloped immune system. Unlike most vaccines based on “learned immunity”, this innovation taps into the DNA of an individual or animal to trigger an immune system response.

Speaking at the awards ceremony, UCC vice-president for research and innovation and chairwoman of the Bridge Network governance committee Prof Anita Maguire said the diversity of this year’s submissions “demonstrates how innovators and scientists are natural problem-solvers that seek to find creative and innovative ways to improve our way of life and deliver real impact”.