The Challenger disaster: a tragedy that knocked faith in space exploration 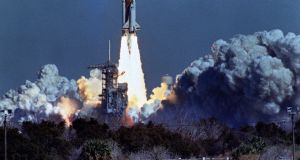 US space shuttle Challenger lifts off on January 28th 1986 from Kennedy Space Center. Challenger was 72 seconds into its flight, travelling at nearly 2,000mph at a height of10 miles, when it was enveloped in a red, orange and white fireball as thousands of tons of liquid hydrogen and oxygen fuel exploded. Photograph: Bob Pearson/AFP/Getty Images

Last week was Space Week and, amid the celebrations of advances in astrophysics, astronomy and space exploration, it seems only right to also mark the 30th anniversary of the disaster involving the space shuttle Challenger. I was nine, the same age as my son is now, when Challenger exploded barely a minute into launch. Some estimate that almost one-fifth of all Americans, and closer to 50 per cent of all schoolchildren, watched the disaster unfold on TV. On board Challenger was Christa McAuliffe, who was supposed to become the first teacher in space. I remember the build-up and the excitement, the chairs circled round the television, and the shock and confusion as years of planning and seven lives exploded in front of us. I do not recall the news aftermath, but histories of the disaster confirm that there was extraordinary coverage.

The launch, on January 28th, 1986, would have been the 10th for the Challenger. Shuttle flights, where a shuttle capsule is propelled into orbit around Earth for a limited time, had become a major focus of the National Aeronautics and Space Administration (Nasa) programme from the 1970s. The Challenger exploded due to the failure of faulty rubber rings on the rocket booster. The explosion temporarily cast doubt on the shuttle programme and on Nasa’s approach to astronaut safety. Some within Nasa felt that the pressure to launch the anticipated expedition (delayed for several days due to bad weather) had outweighed safety concerns that had been highlighted by staff.

The expedition was historic for a number of reasons. McAuliffe would have been the first of US president Ronald Reagan’s “Teacher in Space” project. The seven-person crew also reflected a slow change from an organisation described as “male, pale and stale” towards a more inclusive workforce representing gender and racial diversity. Ronald McNair, the second African-American to go into space, was to have taken his second shuttle trip aboard the Challenger alongside McAuliffe. Judith Resnick, the second American woman astronaut, would have added to her six days of experience in space.

History also played a role in the disaster’s aftermath. Nasa’s history programme had been established early after its founding with the aim of both recording history and using that history to advise the agency where possible. Suddenly history seemed absolutely vital: both journalists and Nasa had a lot of historical questions. How had Nasa handled past disasters? What was the safety record of the shuttle programme? Was some internal change to the organisation responsible for the disaster? Could history provide a pathway for the future? Nasa in crisis even decided to revisit history by recalling James C Fletcher as administrator. Fletcher had overseen the beginning of the shuttle programme in 1971 and it was hoped that he could restore faith in both the agency and shuttles after the Challenger disaster.

Like all such disasters, the Challenger led to a period of questioning about humanity’s relationship to science and technology. The shuttle programme was temporarily discontinued and many asked whether space exploration represented hubris in action. Both Nasa and the Reagan administration launched investigations into the disaster and the agency’s funding was cut. Dark humour from the time suggests just how damaging the disaster was to Nasa’s reputation: What does Nasa stand for? Need another seven astronauts.

Although crass, such jokes strike at the heart of objections raised about the direction that the study of space had taken. For some scientists as well as members of the public, the shuttle programme was really the study of humans in space with all the risks and expense that entailed. Many wanted to see Nasa move away from the idea of human residency in space towards a greater emphasis on unmanned exploration. The dream of “going into space” or “becoming an astronaut” has enduring appeal and has probably contributed significantly to the continued emphasis on manned exploration. The success of commercial ventures to bring civilians into space seems to confirm this. We still dream of a future in which we leave this earth behind and head for that final frontier.

Juliana Adelman is a history lecturer at Dublin City University