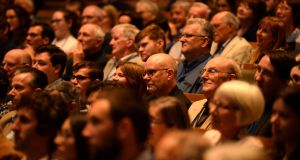 Attending the Schrodinger at 75; The Future of Biology, organised by Trinity College Dublin at the National Concert Hall, Dublin. Photograph: Dara Mac Dónaill / The Irish Times

“Scientific wellness” should be widely adopted as a health strategy to avoid chronic illnesses and reduce healthcare costs, according to Dr Leroy Hood, founder of the Institute for Systems Biology in Seattle.

This strategy was an entirely new way of doing medicine, which he described as “P4 medicine,” in that it was “predictive, personalised, preventive and participatory”.

Speaking at the “Schrödinger at 75 conference” on the future of biology, in Dublin on Wednesday, Dr Hood was critical of how much modern medicine was devoted to disease alone. New technologies in biology, however, “means we can now focus on wellness too”.

He outlined how in 2014 he persuaded 108 friends to take part in an experiment involving “deep phenotyping,” which involved a thorough analysis of their genome, as well as tracking their behaviour using devices such as a Fitbit and analysing “biomarkers” such as particular proteins.

“If you look at the determinants of health, genetics has a 30 per cent contribution, environment and lifestyle make up 60 per cent, and healthcare 10 per cent,” Dr Hood added. A better understanding of genetics and lifestyle could allow people take actions to make them healthier but it was “not all in your genes”.

The knowledge gained from the study of each of the 108 individuals was used by health coaches to encourage lifestyle changes to make them healthier.

He started to take vitamin D, for example, but discovered from his own clinical chemistry measurements that his genetic make-up meant he poorly absorbed the vitamin – He had since upped his dose.

After some of the “108 pioneers” wanted to continue with the programme, he founded a company, Arivale, in 2015 to promote data driven wellness and coaching. Understanding a person’s genetics and health status could help highlight high cholesterol risk or “a high inflammatory status” associated with irritable bowel disease, he said..

“Scientific wellness is going to strikingly increase the health of the individual. The future of medicine is going to be very different from what we had in the past,” Dr Hoods concluded. He blamed a lack of progress on health systems obsessed with money and conservative physicians.

Gene editing technology, which has the ability to change an organism’s DNA, was becoming so precise it offered real hope of interventions capable of treating disease and curing cancers, the conference was told.

The 36-year-old, who pioneered CRISPR-Cas 9 protein, said it had the potential to be programmed to cleave certain portions of human DNA in the nucleus of the cell and carry out gene repair. It had the power to be directed to a certain part of the cell, where it could turn on or off a gene.

Using the latest form of the technology, CRISPR-Cas 13, the genetic editing was more precise in targeting “disease-causing mutations”. His team was testing the technology using animal models, and working on how to ensure better delivery into the human body using a virus.

Prof Zhang predicted that there was a very exciting future for gene editing, and a likelihood that a range of “programmable proteins” will emerge. At present, they were concentrating their search on microbes.