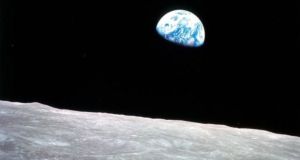 A photograph of Earth with the moon in the foreground. It was taken by the crew of Apollo 8 on Christmas Eve, 1968

Nasa has announced plans to put Americans back on the moon “to stay” by 2028 by working with private companies.

In a document called a Broad Agency Announcement, the US space agency outlined a procurement plan that seeks proposals from commercial partners for a descent module, a space refuelling system and a transfer vehicle by March 25th.

In a briefing, Bill Gerstenmaier, Nasa’s associate administrator for human exploration and operations, said “This [the process] is really sustainable, this is going to be fast.”

“This time, when we go to the moon, we’re actually going to stay,” Nasa administrator Jim Bridenstine told reporters. “We’re not going to leave flags and footprints and then come home, to not go back for another 50 years.

“We’re doing it entirely different than every other country in the world. What we’re doing is, we’re making it sustainable so you can go back and forth regularly with humans.”

According to Nasa, the commercial companies would need to cover at least 10 to 20 per cent of the development costs, depending on the size of the company.

US president Donald Trump said in 2017 he wants to return astronauts to the lunar surface and establish a foundation there for an eventual mission to Mars.

In January, a Chinese spacecraft made the first-ever landing on the far side of the moon. The moon is tidally locked to Earth, rotating at the same rate that it orbits our planet, so the far side - or the “dark side” - is never visible from Earth.

China said in 2017 it was making preparations to send a person to the moon.