Space . . . a new frontier is announced 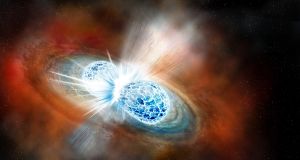 An artist’s rendering of the merger of two neutron stars. Image: Robin Dienel/The Carnegie Institution for Science via The New York Times

A collision of two neutron stars, 130 million light years away, has opened up “a new window on the Universe”. The spectacular event which occurred on August 17th last generated ripples in the fabric of space that were felt on Earth.

Scientists not only “heard” the phenomenon by measuring vibrations in space-time, they also used satellite and ground-based telescopes to see light and radiation pouring out of the stellar fireball, known as a “kilonova”.

To mark the overall achievement, seven major research papers have been published simultaneously. The findings shed light on the origins of cosmic explosions known as gamma-ray bursts and gravitational waves which were predicted by Albert Einstein a century ago in his general theory of relativity.

Astrophysicists from the Dublin Institute of Advanced Studies (DIAS), UCD and Queens University, Belfast (QUB), have contributed in a major way to the discovery and interpretation of the violent collision between the two super-dense stars.

The significance of the event was outlined at a press conference hosted by NASA in the US. “It’s the greatest fireworks show in the universe,” said David Reitze of the California Institute of Technology and the executive director of the Laser Interferometer Gravitational-Wave Observatory known as LIGO, which first detected the fierce collision.

Two seconds after the Ligo detection, a burst of gamma rays from the collision was captured by NASA’s Fermi space telescope. Astronomers around the world quickly turned their telescopes and dishes towards a small patch in the southern sky and also saw the flash across the visible and invisible light spectrum. Virgo, a gravitational wave detection facility near Pisa in Italy and the European Southern Observatory’s (ESO) in Chile observed what followed, and have fed in vast amounts of data, which thousands of scientists across the globe are analysing.

Three scientists from the DIAS school of cosmic physics have contributed to the research; Prof Felix Aharonian, Prof Luke Drury and Dr Carlo Romoli, who are part of a worldwide team of more than 4,500 scientists who announced their findings. “For the first time we have seen a gravitational wave signal from the merging of two neutron stars and the subsequent gamma-ray burst explosion. This is truly an exciting discovery,” Prof Drury said.

He added: “Following last year’s detection of the merging black holes by LIGO, which has just been awarded the Nobel Prize in Physics 2017, this result marks the beginning of a totally new era in gravitational wave astronomy, and in my opinion, deserves a second Nobel Prize.”

“With today’s announcement we are seeing the dawn of a new field of ‘multimessenger astronomy’ and opening up a whole new window on the Universe,” Dr Fraser said. “We can now say with some confidence that Cesium and Tellurium on Earth, which are for example used in atomic clocks, electronics and solar panels, would have been produced in a merger of two neutron stars in our own galaxy, more than 4.5 billion years ago.”

Dr Antonio Martin-Carrillo said: “Over the last 30 years, we have been studying gamma-ray bursts trying to understand their nature and origin. However, by the time we see a gamma-ray burst whatever created it is gone.”

The gravitational event in August, known as GW170817, would allow them test “gamma-ray burst theories and improve our understanding of these extremely powerful events”, he said.

They were picked up on Earth by two sensitive detectors in Washington and Louisiana in the US, operated by the Laser Interferometer Gravitational-Wave Observatory (Ligo).

The nuclear furnace lit by merging neutron stars led to the creation of gold on a cosmic scale and other heavy elements including platinum and uranium, confirming theories about their origins. This observation may allow scientists to explain the unknown origin of such metals found on Earth.

The collision led to the fifth detection of gravitational waves on Earth – those involved in their original detection were awarded a Nobel Prize recently. Previously, gravitational wave detection had been traced to black holes crashing together in remote regions of the universe more than a billion light years away.

The new event was caused by colliding neutron stars, which were burned out remnants of giant stars so dense that a teaspoon of their material on Earth would weigh a billion tons. The two objects, each about 20km in diameter, stretched and distorted space-time as they spiralled towards each other and finally collided. Like ripples from a stone thrown in a pond, the gravitational waves fanned out across the universe at the speed of light.

These discoveries back the case for supporting Irish astronomers’ participation in international consortia “that operate at the frontier of fundamental research, on a scale that cannot be achieved by any single institute or country” Prof Hanlon said.