Putting the new coronavirus firmly in the picture

Creating a visual representation that communicates the precise ‘moment of infection’ 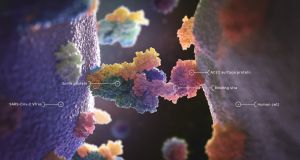 Coronavirus at the point of infection: the visual effect was created by Irish animator and data scientist Eoin Winston of Nexu and Jason McLellan from the University of Texas.

There are many confounding aspects of Sars-CoV-2 (its medical term), the virus that causes Covid-19. One is that we can’t see it with the naked eye. Avoiding something that you can’t see brings its own challenges, but Eoin Winston wants to help us picture the virus and get a better visual understanding of what we are dealing with. This can be of great assistance to researchers in developing a vaccine and antiviral treatments.

Working with scientists in Ireland and the US, including the group in Texas that identified a structure called the “spike protein” on the surface of Sars-CoV-2, Winston has developed a series of images of the virus that have also been used in media reports around the world.

In some ways, he was ahead of the illustration curve when the news emerged of cases in China late in 2019, because he was already working on related viruses.

“We are constantly tracking scientific developments and developing images and content,” says Winston, who co-founded Nexu Science Communication in 2017 with Frank Munnelly.

“We had already been working with Trinity Biomedical Sciences Institute in Trinity College Dublin for some time on 3D visualisations of Mers (Middle East Respiratory Syndrome) and Sars (Severe Acute Respiratory Syndrome), which are both members of the coronavirus family of viruses.

“So once it became clear we were dealing with a new coronavirus in this current viral outbreak, we immediately decided to build on what we had developed with Mers and Sars and create an updated model that would be in line with the understanding of this new coronavirus.”

This meant getting up to speed with the exact structure of Sars-CoV-2, so Winston began working with researchers at Trinity and at Yale University to “block in” the known viral structures. Then they collaborated with Jason S. McLellan’s lab in the University of Texas at Austin.

They were able to create a visualisation of the “moment of infection” where we see the Covid-19 virus spike protein binding to the Ace2 protein on a human cell. This was the first time that this binding was described visually for Covid-19.”

The resulting images have been used by international media, including The Irish Times; Science Illustrated, Reuters, the Washington Post, the Financial Times, Business Insider, Apple News and many more.

“As a gesture of our solidarity with the front-line workers and all those tasked in our public health systems with communicating and explaining the nature of this virus and its pathology, we made our images available free and distributed them to news agencies,” says Winston, who trained as an animator in Ballyfermot College and has been working in science communication for almost 20 years, mostly in 3D animation and illustration and interactive media.

“I have always been fascinated by and inspired by science. Every day our challenge is to capture the complexities of science in a unique and interesting way,” he says.

Allowing gastropubs but not ‘wet pubs’ to reopen based on no evidence - vintners 08:09
Honour front line staff fighting Covid-19 with job security, says President Higgins 07:54
New direct ferry to Dunkirk will be valuable entry point for lorries to Europe after Brexit 07:00
School at centre of major Covid-19 outbreak unaware of case for days 06:57
Covid-19 a likely ‘catalyst’ for Dublin redevelopment 02:00