Halloween is a load of rubbish 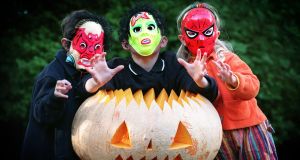 “The harvest festivals of my youth have been overtaken by something closer to a festival of waste that celebrates disposable plastic decorations, single-use kids’ costumes and enormous buckets of sweets, each one in its own little unrecyclable cellophane wrapper.” Photograph: David Sleator

What are you doing for Halloween? I know what I’ll be doing. As soon as the kids’ sugar slumps kick in and the face paint is packed away, I’ll be sitting down to sort through what’s left of the loot and throwing away a good 80 per cent of it. Don’t get me wrong. I don’t have a problem with dressing up, carving pumpkins, and howling “Trick or TREEEEEAT” at neighbours’ front doors. What I do have a problem with is waste. And Halloween is terrifyingly full of it.

Call me old-fashioned, but to me, autumn is traditionally a time of plenty when we prepare for the long winter ahead with pickles, chutneys, jams and preserves – waste not want not, as my grandma always said. But the harvest festivals of my youth have been overtaken by something closer to a festival of waste that celebrates disposable plastic decorations, single-use kids’ costumes and enormous buckets of sweets, each one in its own little unrecyclable cellophane wrapper.

No parent is immune to the headlines on childhood obesity or the toxifying effects of sugar on our health, so we ration what we can and dump what we can’t into the overflowing bin in the kitchen. But this is just kicking the can of toxicity down the road. Even if we are stubborn enough (like me) to separate the wrapper from each individual sweet and sort them into the appropriate bins to be thrown “away”, the fundamental problem of waste remains: there is no such place as “away”.

Plastic pollution is one of the biggest global challenges we face today. Alarmingly, we produce 300 million tonnes of plastic per year – that’s about the same as the weight of all the people on the planet. Plastic production is due to double in the next 20 years, and then double again by 2050.

And where does it go when we are finished with it? Sure, some of it can be recycled (although not infinitely, because the components degrade over time and become unrecyclable), but the vast majority ends up in landfill, and from there into our soils, our rivers and our oceans. By 2050, there will be more plastic in the oceans than fish, entangling sea creatures and trapping them, mimicking their food, and releasing toxins that poison them: marine turtles feed on plastic bags because they float in the ocean like jellyfish. Alabtrosses, those vast ocean-going birds, are bringing belly-fulls of plastic instead of squid back to their nests to feed their chicks. The chicks can’t digest the plastic, so they die of starvation.

But it’s not just about albatrosses or turtles, or even about the environment – that abstract notion of something we’re supposed to care about for reasons we don’t fully understand. It’s about people too. Society doesn’t acknowledge it very often, but human beings are as much a part of environmental systems as any other living thing. The plastics that we throw “away” are in our drinking water and food too, doing things to our bodies that science does not yet understand, and may not fully understand for generations.

The public campaigns on childhood obesity may have made us realise that giving kids unfettered access to pillowcases full of sugar is not a good idea. At the level of the individual, within our own families, we understand that this is toxic, and that we should take precautions.

But – for reasons that exasperate me and others who study this stuff – the same logic does not extend to the planet.

Plastic may not have had its “sugar moment” yet, but perhaps it’s not far away: a recent study found that 83 per cent of tap water samples in countries including the US, UK, France and Germany were contaminated with microplastics. A separate Irish study by GMIT found microplastics in Irish tap and well water samples. The next big question is to find out whether or not even smaller nanoparticles are in there too, bits of plastic that are sufficiently tiny to penetrate our cells and organs. Now that’s truly terrifying.