President pays tribute to Mike Cooley, ‘one of the finest Irish scientists’

Tuam native placed the human at centre of technological innovation 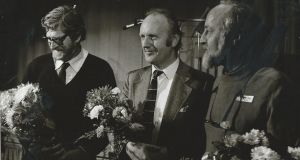 In a statement, he said he “heard with great sorrow of the passing of one of the finest Irish scientists”.

“Mike Cooley, in his books, including Architect or Bee?, and in all his life, was deeply committed to the delivery of science and technology for universal benefit,” he added.

Published in 1980, Architect or Bee? was a critique of the automation and computerisation of engineering work which put the case that “a new organisation of technology could provide social good rather than profit”.

Cooley coined the term “human-centred systems” in the context of the transition in his profession from traditional drafting at a drawing board to computer-aided design. The term – as used in economics, computing and design – aims to preserve or enhance human skills, in both manual and office work, in environments in which technology tends to undermine skills people use in their work.

“His life was one of deep commitment to the importance of the person, in every type of work, and to the trade union movement’s important role in advancing these aims,” said Mr Higgins, who wrote the foreword for Cooley’s 2018 work, Delinquent Genius: The Strange Affair of Man and His Technology.

A native of Tuam, Co Galway, Cooley was born in 1934. He attended the local Christian Brothers school, where his closest friends were the late playwright Tom Murphy and trade unionist Mick Brennan. In spite of considerable resistance, the bright trio wanted to go the local “tech” to learn technical drawing and metal work, and to make stuff including an aeroplane.

With support from parents, the Christian Brothers relented and allowed the boys to cross the road once a week to the Archbishop McHale Technical School. Cooley remembered the Brothers’ reaction as one of scorn: “They couldn’t understand how a smart boy would want to work with his hands.”

“What is extraordinary in the life, the work and the social contribution, of Prof Cooley, and the others, is that they saw that excellence could be achieved through a combination of hand and brain, that curiosity was not an impediment to learning but rather a source of innovation,” Mr Higgins said in the foreword.

They would later train together as apprentices in Tuam Sugar Factory under the brilliant Viennese machine master Franz Kaplan – during the 1950s, the factory was the largest industrial complex west of the Shannon.

Cooley went on to work with the British company Lucas Aerospace where during the 1970s he became involved in workplace activism. In 1981, he was winner of the Right Livelihood Award, known as the alternative Nobel prize, for “designing and promoting the theory and practice of human-centred, socially useful production”.

During the 1980s he was director of technology at the Greater London Enterprise Board which he co-founded with Ken Livingstone.

“Driven by his views on the importance of work as a human activity, in his rich life he served as a shop steward, and pioneered the concept of skills audits in response to factory closures. I was pleased to draw on his advice and services on the closure of Digital Equipment Corporation [in Galway]in the 1990s,” the President noted.

His library has been donated to Waterford Institute of Technology, where next year a centre for science excellence will be built around Cooley’s work.