Prehistoric mega-shark could have fins as large as a human 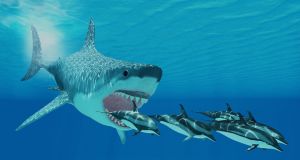 A computerised image of Megalodon swimming after a pod of dolphins. Photograph: Corey Ford/iStock

The entire size of a prehistoric mega-shark made famous in Hollywood films has been revealed in a new study.

Previously only the length of the Otodus megalodon had been estimated, but a team from the University of Bristol and Swansea University have determined the size of the rest of its body including fins as large as an entire adult human.

The great white shark – depicted in 1975 movie hit Jaws – is a distant descendant of the megalodon and often measures more than six metres in length.

Researchers used mathematical methods and comparisons with living relatives to find the overall size of the megalodon, which lived from about 23 million to three million years ago but has attracted fame more recently in Hollywood movies including The Meg.

The results suggest a 16-metre megalodon is likely to have had a head around 4.65 metres long, a dorsal fin about 1.62 metres tall and a tail around 3.85 metres high.

This means an adult human could stand on the back of the shark and be about the same height as the dorsal fin.

Jack Cooper, who has completed a master of science degree in palaeobiology at the University of Bristol’s School of Earth Sciences, described the study as his “dream project”.

“I have always been mad about sharks. As an undergraduate, I have worked and dived with great whites in South Africa – protected by a steel cage of course,” he said.

“It’s that sense of danger, but also that sharks are such beautiful and well-adapted animals, that makes them so attractive to study.

“Megalodon was actually the very animal that inspired me to pursue palaeontology in the first place at just six years old, so I was over the moon to get a chance to study it.

“This was my dream project. But to study the whole animal is difficult considering that all we really have are lots of isolated teeth.”

Previously the fossil shark was only compared with the great white but the latest analysis was expanded to include five modern sharks.

The researchers first tested whether the modern animals changed proportion as they grew but found this was not the case.

“This means we could simply take the growth curves of the five modern forms and project the overall shape as they get larger and larger – right up to a body length of 16 metres,” Mr Cooper said.

The study is published in the journal Scientific Reports. – PA