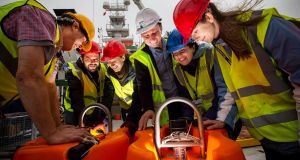 Ireland’s earthquake activity and data on more distant seismic events will be measured by an array of ocean-bottom sensors deployed around the Irish coast over the next three weeks.

Links between ocean wave activity, deep sea landslides and tsunamis will also be researched as part of the project, led by the Dublin Institute for Advanced Studies (DIAS).

The Marine Institute’s research vessel RV Celtic Explorer is due to leave Cork on Tuesday to deploy the 18 seismometers, covering the entire Irish offshore area as well as areas in British and Icelandic waters.

Lead researcher Dr Sergei Lebedev, of the DIAS, said Ireland is “uniquely suited to this type of deep-sea science, as 90 per cent of the Irish territory is offshore, most of it to the west of Ireland.

“The ocean-bottom sensors will record the tiny vibrations of the Earth caused by seismic waves, generated by earthquakes and by the ocean waves,” Dr Lebedev said.

“As the waves propagate through the Earth’s interior on their way to the seismic stations, they accumulate information on the structure of the Earth that they encounter,” he said.

DIAS school of cosmic physics director Prof Chris Bean describes the deployment as by far the most comprehensive in both Europe and the north-east Atlantic.

“There are specific seismically-active zones where clusters of these types of instruments have been placed before, but this is a first for Ireland,”Prof Bean said.

“The seismometers are able to record very small ground vibrations, similar to those detecting earthquakes, and they also have a pressure sensor which can record sound waves in the water – as in whales, dolphins or industrial sounds,”he explained.

“Our research is focusing on local geohazards – as we do have earthquakes off Ireland – and more distant events, but we are also interested in learning how ocean waves are pressurising the seabed,”he said.

The seismometers will sit on the seabed for about 20 months, and have been programmed to release their weights and float to the surface where they will be picked up using radio signals in almost two years’ time.

School students have already been invited to name the instruments, as part of the project known as SEA-SEIS (Structure, Evolution and Seismic hazard of the Irish offshore). A song/rap competition on a seismology theme is also open to secondary schools.

DIAS, which was founded by Éamon de Valera in 1940 as a centre of excellent focusing on Celtic studies, theoretical and cosmic physics, runs the Dunsink Observatory and co-ordinates a range of national initiatives. The project is co-funded by Science Foundation Ireland, Geological Survey of Ireland, and the Marine Institute.