Brian Lucey’s report found that, out of a total income of €108 million between 2007 and 2016, Crann/Amber have generated €505 million in gross national output 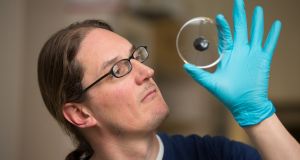 ProfJonathan Coleman: ‘It’s a process, and after 17 years we have got to this point, but we’re still on a curve that needs to continue to go up to get to where we need to be’ 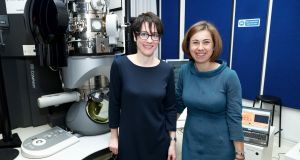 Lorraine Byrne (right): ‘The evolution of materials has tracked all industrial revolutions from the Bronze and Iron ages to coal in the 19th century to the silicon age in the 20th century’. Photograph: Maxwell Photography.ie

It’s the little things that can make the biggest difference. And it’s the very little things that are making Ireland a veritable giant in the world of science. Nanomaterials are so small, they usually can’t be seen by the naked eye, but their impact on Ireland’s economy is there for all to see – and it looks pretty impressive, even without a microscope.

In 2016, The Thomson Reuters InCites Essential Science Indicators ranked Ireland the global number one for nanotechnology, and number three for materials science. That was one big jump for one small country, especially when we’re competing with such major players as Harvard, Stanford and Cambridge, who are all making huge advances in the field of nanomaterials.

Last November, Ireland’s leading nanomaterials research centre published its 2007-2016 Economic Impact Report, and it shows that this microscopic-level technology is having tangible benefits for economic growth and employment in Ireland.

The report was drawn up by Crann, the Centre for Research on Adaptive Nanostructures and Nanodevices at Trinity College, and Amber, the Advanced Materials and BioEngineering Research centre which emerged from a team-up between Crann, the Trinity Centre for Bioengineering, UCC and The Royal College of Surgeons in Ireland. Since it was set up in 2013, Amber has ramped up research in these atomic-level materials, and forged some strong links with industry to bring nanomaterials into use in manufacturing to create innovative products.

Amber commissioned Prof Brian Lucey, a leading economist at Trinity, to do the rather complicated sums for this report. His brief was to evaluate the economic impacts that Crann and Amber have had in the past 10 years, and to measure their links with business and the wider community. He used the input-output approach to analyse Amber’s economic and employment impacts, and found that the Irish taxpayer got a lot more out of it than they put in.

The report found that, out of a total income of €108 million between 2007 and 2016, Crann/Amber have generated €505 million in gross national output. What that boils down to is that for every euro invested in nanomaterial science, an extra five euro is put into the Irish economy.

Nanomaterials have also made their mark on the Irish jobs market. From a core staff of 1,116, Crann/Amber’s work over the past decade has stimulated 14,279 jobs in the wider economy, according to the report.

And then there’s the reputational gain for Ireland in the global science industry. It’s hard to quantify what our nanomaterials industry has done for our standing internationally, but if you measure it by the number of research papers published in major science journals (2,400) and the number of citations generated by research here (76,304), then it’s clear we’re no longer a minuscule player in the field of nanoscience.

We may not be winning Eurovision song contests or qualifying for World Cups these days, but in the realm of nanoscience, we’re Dana and Damien Duff rolled into one.

Nanotechnology is the study of materials on a tiny scale, usually measuring no more than 100 nanometres. To put it in perspective, a nanometre is one billionth of a metre, with a human hair somewhere between 50,000 and 100,000 nanometres in thickness. Amber has been working to refine nanomaterials, and put them to use in manufactured products, making them stronger, more flexible, more conductive and better-performing.

In 2016, to celebrate the growing number of Irish Academy Award nominees, Amber created the world’s smallest Oscar statuette. Its head was just 25 nanometres wide – about 20,000 times smaller than a full stop. Saoirse Ronan would have no problem finding room on her mantelpiece for that.

So, how did we get from bit player to marquee name in the nanoscience story? It didn’t just happen spontaneously, says Sir John Pethica, co-founder of Crann and chief scientific adviser at the UK’s National Physical Laboratory.

“I came over here because Science Foundation Ireland was created, and it meant Ireland became a serious player in the scientific community. Before that it simply wasn’t in the game. So we asked ourselves, how do you set up structures which allow Ireland to do this and satisfy the need for economic and social benefits, and that’s why Crann was set up.”

The study of nanoscience “didn’t come from nowhere” says Prof Jonathan Coleman, principal investigator at Amber. “The school of physics in Trinity is essentially a school of material science so we had a lot of good people to build on.” And the industrial landscape in Ireland was favourable, he adds, with multinational companies such as Intel looking to monetise innovative research in the field.

“It’s in everything – your clothes, your cellphone, paint, batteries. You’d be hard pressed to name a technology on which the economy is built which is not based on material science.”

But though our status in the global nanoscience arena has been boosted by our world number one ranking, both men caution against getting too big for our boots.

“I think we’re up there, but to say from one metric that were number one it’s probably not a complete reflection of the reality,” says Prof Coleman. “We’re lucky that our work in the area of nanoscience has been blessed with this building through the hard work of Sir John and others, but the whole ecosystem of Ireland as a whole isn’t like that. A lot of other people don’t have these resources, so the whole area of science in Ireland is much more patchy than this place would have you believe.”

And there are big obstacles ahead that we need to surmount if Ireland is going to stay on top of its game in the nanoscience industry. With a shortage of Stem teachers in Ireland, it’s hard to see where the next generation of physics graduates is going to come from. And Ireland’s infrastructure is still not at the level it needs to be to attract top people from other countries to work in the field and bring nanomaterial products to market.

“We’re not at the pinnacle yet,” says Prof Coleman. “It’s a process, and after 17 years we have got to this point, but we’re still on a curve that needs to continue to go up to get to where we need to be.”

A pipeline into industry

If you want to have a strong pipeline into industry, you couldn’t pick a better academic subject than materials science, says Lorraine Byrne, executive director of Amber.

The evolution of materials has tracked all industrial revolutions, notes Byrne, from the Bronze and Iron ages to coal in the 19th century to the silicon age in the 20th century. Little wonder, then, that the industry keeps a close eye on research into materials science, because that could lead to the next hot product on the shelves. Byrne’s job is to keep that pipeline open and running smoothly for the benefit of both the researchers and the industry at large.

“When it was first mooted that industry would pay for research, I thought that was bonkers, people will never sign up for that. I couldn’t see that model working, knowing what it takes to get a budget to invest in universities. But now we have 37 companies who all contribute cash to fund collaborative research projects, and we’ve contracted out for about €6 million, so that’s phenomenal coming from a standing start in 2013.

“It all comes from the science. Industry wants to invest because it recognises the value of the science.”

Amber’s research is not so much industry-led as industry-informed, says Byrne. “Some of our fundamental research, even though it’s a bit blue-sky and very far-reaching, it’s still informed by what we think is the right thing for industry, and so we align ourselves with the needs of industry. There is an endgame there. Often the wackiest ideas can have the highest returns, but it it also high-risk, so you spread your investment and put a small amount into the way-out stuff that may not come to fruition. But if it did come to fruition, my god, it would be revolutionary.”

1 This time, the future of the euro really is at stake
2 State exams may be delayed until late summer or autumn
3 Coronavirus: Doctors fear Covid-19 yet to peak in the State as ICUs near full capacity
4 Coronavirus: Easter 'could be Ireland’s Cheltenham' as gardaí mount 1,000 checks across country
5 Coronavirus: More ‘striking’ evidence BCG vaccine might protect against Covid-19
Real news has value SUBSCRIBE