How colourful and feathery were the dinosaurs?

Dinosaurs are depicted as naked, scaly reptiles, but evidence shows they were much more bird-like 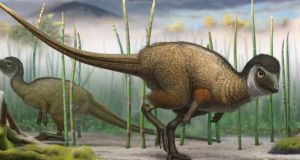 Kulindadromeus: An example of a plant-eating dinosaur with feathers and scales

Jurassic Park (1993) featured Velociraptors hunting park visitors, depicting them as wily lizard-like predators. Time and science, however, have been unkind to the filmmakers. Velociraptors and most other dinosaurs were bird-like creatures. Even Tyrannosaurs rex is believed to have sported a plume (more “terrible emu” than “terrible lizard”).

“Over the past 10 to 15 years we have come to realise that dinosaurs possessed feathers. Not just some, but lots of them,” says Dr Maria McNamara at University College Cork. All sorts of feathered dinosaurs lived during the Jurassic – 201 to 145 million years ago (mya) – with feathers evolving first for insulation and display, not flight.

“Dinosaurs were depicted as these naked, scaly reptiles. Jurassic Park did that. But discoveries in China changed our perception. They were much more bird-like,” says palaeontologist Dr Jakob Vinther at the University of Bristol. Though there are no fossils of Velociraptors with feathers, Chinese fossils prove their relatives were covered in them.

Dinosaurs experimented with feather designs and shapes. Vinther recently re-examined fossils of a dinosaur called Anchiornis, from the Jurassic. Whereas modern birds have a long central shaft, barbs and then filaments that seal feathers together, Anchiornis was different: “[It] had a short shaft, but then long barbs coming off and bundles of filaments. It would have given the dinosaur a much fluffier appearance; more like a shaggy mammal than a bird,” Vinther says.

In 2017, lasers were used to study traces of soft tissue from Anchiornis and revealed a four-winged dinosaur with drumstick shaped legs, padded feet, a slender tail and an arm similar to a modern bird’s wing. The crow-sized dinosaur may have glided through its woodland home.

The first bird is still seen by many as Archaeopteryx (150 mya), a famous fossil discovered in the 19th century in a limestone quarry in Germany. Dublin Zoo put a cast of an Archaeopteryx fossil in its Zoorassic World gallery where visitors can see feather impressions, teeth and a long bony tail, a hodgepodge of dinosaur and bird.

But it was discoveries in China that upended dinosaur science. “We went from a dozen specimens of Archaeopteryx to tens of thousands of feathered specimens, each of which was as amazing,” says Prof Mike Benton, senior dinosaur expert at the University of Bristol. “The level of detail just blew away the field because of the richness of data.”

At the start of his career in the 1980s, Benton was taught Archaeopteryx had about 30 features that set them apart from dinosaurs, including feathers, hallowed bones, reduction of teeth and a wish bone. “All these have been now found in dinosaurs, except one: Powered flight,” says Benton. All parts of the dinosaur family tree had feathers. At a minimum, feathers evolved with early theropod dinosaurs about 200-250 mya, two-legged flesh-eating dinosaurs that gave rise to T-rex.

By examining the shape of granules holding the pigment melanin, scientists such as McNamara have helped decipher the colour of feathers. The first reconstruction of colour was carried out by scientists at the University of Bristol and palaeontologist Dr Patrick Orr at University College Dublin in 2010, reported in the journal Nature. It revealed Sinosauropteryx had a feather-like covering of orange and brown and a striped white and orange tail, probably for display purposes.

In 2014, McNamara co-authored a paper in the journal Science describing a Jurassic dinosaur from Siberia that resembled a flightless bird such as an emu or ostrich (except it had a long tail). This was the first ever example of a plant-eating dinosaur with feathers and scales. Before that, it was only the flesh-eating theropods that were found with feathers. Today, palaeontologists suspect large dinosaurs lacking feathers lost them during evolution, similar to how large mammals such as elephants lost fur.

“If we didn’t have all these fossils from China, our understanding of dinosaurs would be very different today,” says Vinther. “Birds are dinosaurs.”

A land of feathered dragons

Northeast China is ground zero for a revolution in how we see dinosaurs. A huge area in Liaoning province has well-preserved fossils of feathered dinosaurs and early birds, which are remarkably widespread. “The area is huge, probably about 1,000 square kilometres,” says Benton. “It is a little unclear why the fossils are so exceptionally preserved, but lots of the sediment has volcanic ash. For some locations, it seems fossils were captured in ash, a little like Pompeii.”

Most seem to be buried in lake beds or marshes, and many people dig them out to sell to museums and collectors.

The fossils have shifted scientists’ views on how dinosaurs looked and behaved. Many apparently had bright feathers, like birds today, which could have driven sexual selection. Benton says: “There are so many species of these small theropod dinosaurs. It may be that sexual selection was spinning up the number of species.”