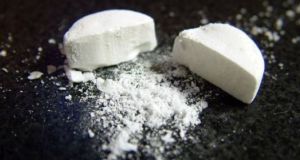 A report from a European drugs-monitoring centre noted: “MDMA is no longer a niche or subcultural drug limited to dance clubs and parties, but is used by a broad range of young people in mainstream nightlife settings, including bars and house parties.” Photograph: iStockPhoto

The use of MDMA is increasing among young Irish adults, according to the latest European drugs report.

The 2017 report by the Lisbon-based European Monitoring Centre for Drugs and Drug Addiction measures the prevalence of drug use, addiction, treatment and deaths in European countries.

The report found cannabis is the most prevalent drug used among young adults in the country, with 14 per cent of 15-34-year-olds saying they have used the drug in the last year.

“MDMA is no longer a niche or subcultural drug limited to dance clubs and parties, but is used by a broad range of young people in mainstream nightlife settings, including bars and house parties,” the report notes.

The next most prevalent drugs used are cocaine (3 per cent) and amphetamines (0.6 per cent).

While a majority of countries reported decreases in injecting-related HIV cases between 2014 and 2015, Germany, Ireland and the United Kingdom reported rises to levels not seen for seven to eight years.

In Ireland and the UK, this was in part related to localised outbreaks of new HIV infections among people who inject drugs.

Dimitris Avramopoulos, European commissioner for migration, home affairs and citizenship, said that the impact of drug use continued to be a “significant challenge for European societies”.

“Over 93 million Europeans have tried an illicit drug in their lives and overdose deaths continue to rise for the third year in a row,” he said.

The monitoring centre highlighted rising overdose deaths, the continued availability of new psychoactive substances and the growing health threat of highly potent synthetic opioids as the key issues of focus in the report.

The centre said it was monitoring more than 620 new psychoactive substances that have appeared on Europe’s drug market in the past 18 months.