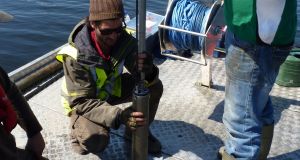 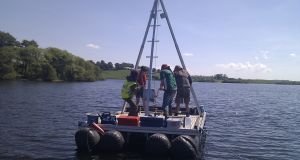 Throughout Earth’s history our planet has undergone massive swings in its climate. Between warm and cold extremes, times when there was little or no ice on Earth and when lush vegetation grew across the planet, to full on ice ages with gigantic ice sheets at the polar regions, Earth’s past has been truly colourful.

We know these details because of the work done by palaeoclimatologists, who perform investigations and studies on specimens extracted from often extreme locations, such as ocean floors and the ice sheets on Greenland and Antarctica.

“By studying past climates we can learn about the connections and complex feedbacks between different parts of the Earth’s climate system on timescales that are much longer than those of historical or modern meteorological observations,” explains Prof Frank McDermott, head of the UCD School of Earth Sciences.

“On very long timescales, Earth’s climate changed slowly due to the movement of the continents, their amalgamation into super-continents, and their subsequent break-up,” says Prof McDermott. “At other times, for example about 100 million years ago in the Cretaceous, atmospheric carbon dioxide levels were probably at least 10 times higher than in the pre-industrial era, causing high global temperatures.

The astronomical variations which Prof McDermott speaks of include changes in how far the Earth is from the sun, as well as the orientation of the planet with respect to the sun (including changes in the Earth’s axial tilt). Over time these factors affect the planet’s climate by controlling the amount of sunlight received by the atmosphere, land and oceans.

Proxies for the past

The human recorded archive of historical weather and climate observations goes back just a few hundred years, meaning other methods are needed to uncover the climate changes of Earth’s deeper past. In particular, the development of so-called climate proxies has been crucial. Proxies are preserved physical characteristics of the past which can be used to infer information in the absence of direct measurements.

“For example, the oxygen isotope ratios of annually-layered ice in the Greenland and Antarctic ice sheets allow us to reconstruct past air temperatures,” Prof McDermott adds.

“Similarly, deposits in caves such as stalagmites can be dated precisely using uranium-series methods to determine when water was dripping into a cave, and to define other times when stalagmites no longer grew because water was frozen in a cold climate.”

But, as with a lot of sciences, these past climate reconstructions contain inherent uncertainties which are important to quantify.

Dr Aaron Potito, head of the School of Geography and Archaeology at NUI Galway, says “palaeoclimate research is often limited by data resolution, as even the most detailed long-term records struggle to accurately reflect short-term events. Also, palaeoclimate evidence can respond to changes in both temperature and precipitation, so that isolating specific climate variables becomes difficult.”

Simulating the past with climate models

One way of estimating the extent of uncertainty in climate proxies is to look at how well their reconstruction of past climate variables – such as temperature and precipitation rates – compares with results from computational climate models.

Climatologists are increasingly using global climate models to simulate what our planet was like in the past, comparing simulated results with the hard geological data used as climate proxies, testing not only the accuracy of proxies, but also of the models themselves.

Dr Potito explains that “verifying models of the past is key in order to test their validity. Palaeoclimate data can thus be used to test the accuracy of models, and see if they can accurately predict the climate response to known forcing mechanisms.

“There are times in the recent past that were warmer than today, and these are often targeted for palaeoclimate modelling, to try to predict climatic system responses to a warmer world.”

According to Prof McDermott: “Historically, climate modellers and palaeoclimate data scientists have not worked closely together, but this is changing due to projects such as PMIP – the Palaeoclimate Intercomparison Project – and similar initiatives, which work towards a more complete understanding of the past, so to better predict our future.”

Conor Purcell is a ‘Science & Nature’ writer with a PhD in Earth Science. He can be found on twitter @ConorPPurcell and some of his other articles at cppurcell.tumblr.com.

Climate models: What are they?

Depending on the amount of CO2 pumped into the atmosphere in the near future, climate predictions for the 21st century include temperature increases ranging between 2 degrees and 8 degrees. Forecasts of future drought and flood risk, at both regional and global levels, are also provided.

Such future climate predictions are made using climate models. These models are built around mathematical descriptions of the physics governing motion on our planet, and of the biology that lives on it, and have become so sophisticated in recent years that they are now being referred to as “Earth System Models”. Using such models, climate modellers can create simulations of the planet at different times in the future, and the past.

Climate models are built in components, each representing a separate part of the Earth system: the atmosphere, the ocean, the land surface and vegetation, the ice-sheets and sea-ice. These Earth system components interact when the model is run, changing in response to increasing carbon dioxide (or some other modelled climate driver) as the model moves forward in time.

These model runs result in predictions of the future climate – or reconstructions of the past – indicated by important climate variables such as temperature, precipitation, and wind strength, which each have a huge impact on life on Earth.