€1.5m suspected to have been laundered into Irish bank account 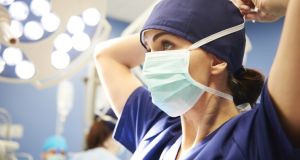 An Irish man in Roscommon is being questioned as part of an international investigation into a “sophisticated” €15 million Covid-19 personal protective equipment financial scam.

Members of the Garda National Economic Crime Bureau and gardaí from Co Roscommon interviewed an Irish citizen on Friday, April 10th, over the suspected laundering of €1.5 million into an Irish bank account – an offence that carries a maximum prison term of 14 years.

The joint Irish, German and Dutch financial intelligence units investigation – supported by Interpol, Europol, Eurojust and national investigative authorities – was launched after German health authorities attempted to purchase 10 million face masks worth about €15 million from a cloned website, according to a statement released by gardaí on Tuesday.

The German company contracted by the German health authority to purchase the masks for use as personal protective equipment later discovered the site through which the international order was made was fraudulent and run by scammers.

The company, which received €15 million from the German district service to purchase the masks, initially contacted what they believed was a legitimate business in Spain with which they had a well-established professional relationship.

Scammers claiming to be the Spanish company said they were unable to fulfil the order given the soaring demand for PPE and referred the German group onto a Dutch supplier through an Irish intermediary. The Germans placed an order for 11 million masks worth €7.7 million through a website they later discovered was a cloned version of a reputable Dutch site.

“The purchaser went onto a website which he thought was a genuine website of a genuine company in Spain, but he wasn’t on that website at all,” Chief Supt Pat Lordain, of the Garda National Economic Crime Bureau told RTÉ’s Morning Ireland.

“He was on a fictitious cloned website which was not real. So, despite the fact that he thought he was purchasing €14.7million worth of face masks, they did not exist on this website – he was never going to get not even one mask.”

The German company agreed to make an upfront payment of €1.5 million to the Irish intermediary’s bank account, which was based in Roscommon, for the delivery of the first 7.7 million masks. The company also transferred a further €880,000 into a fake bank account that appeared to belong to the legitimate Dutch supplier.

Investigators would later discover scammers had captured the address of a real Dutch company that supplies PPE and opened a bank account at the same Dutch bank as the real company.

On March 27th representatives from the German and Irish companies, who met in Amsterdam to inspect and oversee the handover of the mask consignment, learned from the real Dutch supplier that no shipment had ever been ordered.

Some €498,000 was successfully recalled from the Nigerian bank account, following the Dutch investigation.

Meanwhile, the €1.5 million transferred to the Irish bank account in Roscommon was frozen by the Irish financial intelligence unit and the banking sector. Documents and electronic devices connected to the transfer are being forensically examined.

Gardaí are investigating why the money came into the Irish account, where it came from and what the Irish individual knew about the “sophisticated scam”, Chief Supt Lordain said, adding the €1.5 million sent to Ireland would be returned.

Two men were arrested in the Netherlands by Dutch police on April 6th for alleged fraud, falsification and money laundering in connection with the €880,000 transfer.

Interpol is now leading the investigation into the financial scam. Chief Supt Lordain said gardaí would continue to work with police forces in Germany, the Netherlands and Spain and that further arrests were anticipated.