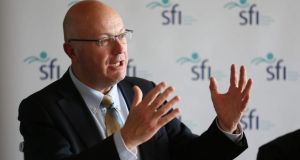 New systems of science research had ensured the State was now in the top 10 globally for the quality of scientific research, and performing in the right areas of science, he told the annual SFI Science Summit at Croke Park, attended by 350 researchers.

Prof Ferguson, who is also chief scientific adviser to the Government, said there was clear evidence of the benefits of “so-called basic, public-good science” which SFI was funding in addition to collaborations with industry.

This was indicated by an analysis of “patent citations” which showed that 300 companies were building intellectual property based on SFI research, 40 per cent of whom were creating jobs in Ireland.

“Only 10 per cent are IDA clients. A lot of them are small companies; a lot are indigenous companies.”

SFI for the first time is to directly fund PhD researchers, with its first intake of students in 2019 in areas of high priority, and likely to lead to employment generation. As a consequence of Brexit, it would shortly announce the funding of 240 PhD researchers in a joint Irish-UK initiative, jointly funded by leading UK universities and SFI research centres, with students dividing their time between both locations.

Prof Ferguson paid tribute to the winners of the 2017 SFI awards, who he said reflected “the very best outputs and achievements of the Irish research community”. Their hard work and success “will be a source of inspiration to their peers and the next generation of researchers in Ireland,” he predicted.

The SFI researcher of the year award was given to Prof Mike Zaworotko, Bernal chair of crystal engineering at the University of Limerick, who specialises in crystal engineering research. His work has many applications in pharmaceuticals, clean tech, energy and “carbon capture” reducing CO2 in the atmosphere which causes global warming.

The SFI early career researcher award was given to Dr Rachel McLoughlin, of Trinity College Dublin (TCD) for her work on Staphylococcus aureus bacteria, which can cause severe infections and are resistant to antibiotics. Her research focuses on how bacteria interact with the immune system and on treatment strategies to help control a global epidemic of antibiotic-resistant infections caused by the bug.

Broadcaster Dr Aoibhinn Ní Shúilleabháin, assistant professor at the school of mathematics and statistics in UCD, won the award for “outstanding contribution to the popularisation of science”. A regular contributor to television and radio, she has also set up initiatives to promote physics and maths including City of Physics and Maths Sparks in UCD.

The industry partnership award was won by the SSPC and Advanced Biopharmaceutical Technologies Spokes Project, which is led by the SSPC SFI Research Centre in partnership with seven leading biopharmaceutical companies in Ireland and the National Institute for Bioprocess Research and Training in Dublin. The partnership is involved in the industrial production of biological material, such as genetically-engineered microbial strains, chemicals or fuels generated by a biological process.

The SFI “best international engagement award” was given to Prof Peter Gallagher of TCD for his work on the Irish Low-Frequency Array radio telescope, which is based in Birr, Co Offaly. This links a network of radio telescopes that stretches across nearly 2,000km across Europe and is opening up new frontiers in astrophysics.

Dr Mark Jessopp of UCC won the award for “research image of the year” for a shot of seabirds foraging on marine zooplankton in the Arctic.

The recipient of the SFI entrepreneurship award was Dr Peter Cahill, who set up Voysis, a speech technology company using artificial intelligence, which employs 25 people and is based in Dublin and Boston.