That’s Maths: How to slingshot a spaceship on to an asteroid 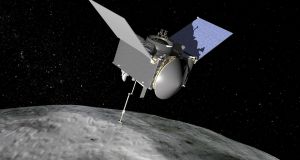 The Voyager 1 and Voyager 2 spacecraft have now left the solar system and will continue their journeys into deep space indefinitely. How did we manage to send them so far? The Voyager spacecraft used gravity assists to visit Jupiter, Saturn, Uranus and Neptune in the late 1970s and 1980s. Gravity assist manoeuvres, known as slingshots, are essential for interplanetary missions. They were first used in the Soviet Luna-3 mission in 1959, when images of the far side of the Moon were obtained. Space-mission planners use them because they require no fuel and the gain in speed dramatically shortens the time of treks to the outer planets.

Presently, a small spacecraft known as OSIRIS-REx is on its way to an asteroid called Bennu. Bennu is about 500m (1,640ft) across and travels in a near-Earth orbit. The aim of the mission is to collect rock samples from the asteroid, returning them to Earth in 2023. Nasa scientists have used Earth’s gravity to slingshot OSIRIS-REx towards Bennu. In an Earth flyby in September, the plane of the spacecraft’s orbit changed by about 6 degrees, aligning it with the orbit of Bennu. As it approached Earth, it stole some momentum, boosting its speed. Relative to the Sun, its speed increased by about 14,000km/h (870mph) without any fuel being burned. The spacecraft is on target to arrive at Bennu in autumn 2018.

What is the source of the energy needed to accelerate the spacecraft? It cannot appear from nowhere. It comes from the energy of the moving planet

Gravity assists seem to be magic: providing something for nothing. Since energy is conserved, how can a spacecraft obtain a boost in speed by passing a planet? Reasoning from the law of conservation of energy, we would argue that it should speed up on approach to a planet, but decelerate while departing. The paradox can be resolved by looking at the problem from two different reference frames. We compare the view from the planet and from the Sun.

To an observer on the planet, the energy of the spacecraft (kinetic energy plus potential energy) is conserved. The spacecraft speeds up on approach, accelerating towards the planet. As is departs, it must climb again, losing the kinetic energy that it gained on approach. Its final speed is the same as the speed before the encounter. However, it will be heading in a different direction, the angle of change depending on how close it comes to the planet.

What is the source of the energy needed to accelerate the spacecraft? It cannot appear from nowhere. It comes from the energy of the moving planet. There is a transfer of kinetic energy from the planet to the spacecraft. If the spacecraft speeds up, the planet must slow down very slightly. However, since Earth is massive compared to OSIRIS-REx, the effect on the orbit of our planet is completely negligible.

Peter Lynch is emeritus professor at UCD School of Mathematics & Statistics. He blogs at thatsmaths.com