Science Week 2017: Yeast, waste and the big battle against ‘stuff’ 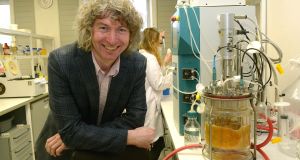 How can we use yeast to make ingredients for food and cosmetics sustainably? Or harness the energy and nutrients of agricultural waste? How about using “sustainable materials” to offset environmental damage?

These are some of the themes to be discussed at the Science for Sustainability exhibition in Cork. The free exhibition, which is open to visitors throughout Science Week, will feature evening discussions and demonstrations to highlight how science could tackle some environmental issues.

One of the talks will look at using yeast as mini-factories for making useful products in the food and cosmetics industries. We are already familiar with yeast in baking, fermenting and brewing, notes speaker Dr John Morrissey, a senior lecturer at University College Cork’s school of microbiology.

The food industry is already using yeast to make chemicals that impart flavour or aroma, notes Morrissey, and these can offer a compact and sustainable alternative to making the chemicals using petroleum or harvesting them from plants.

Morrissey co-ordinates an EU project called CHASSY, which is developing yeast to make fat-based molecules for the cosmetics industry that would otherwise come from petroleum.

In an ideal world, says Morrissey, we could use agricultural waste such as crop stalks to feed yeast that in turn would make useful molecules. Agricultural waste is a big problem in Ireland, notes speaker Prof Jerry Murphy, who directs the Science Foundation Ireland MaREI Centre. “Per capita, Ireland has a very significant amount of agricultural wastes [and] residues, which is also the reason we have one of the largest greenhouse gas emissions per capita in the EU.”

Many of these wastes are suitable for anaerobic digestion, says Murphy, who cites Scandinavian examples of its use. “Denmark now has 10 per cent renewable gas from biogas produced from slurries, dungs and agri-food residues. InLinköping, Sweden, a city the size of Cork, slaughter waste is digested, biogas is produced and the bus service runs on the biogas,” he says. “If Ireland is actually serious about reducing climate emissions by a factor of five, and we really care about the planet, then we need to provide a range of renewable energy technologies including biogas schemes.”

Speaker Dr Niall O’Leary also wants to get more from waste. He works on an Environmental Protection Agency project called NEWTRIENTS, which looks to capture nutrients in wastewater from dairy processing and use them to make new products, such as biodegradable plastics or high-protein plant crops for animal feed. “In essence, we are seeking to create a sustainable cycle within one of Ireland’s major agri-food sectors, with economic as well as environmental benefits,” says O’Leary, a lecturer in microbiology at UCC.

Our addiction to stuff is a major issue environmental issue, according to speaker Dr Eoin Flynn, head of the Sustainable Materials Laboratory at the Environmental Research Institute in UCC.

“The idea that the global population can continue its habits of consumption is wrong,” he says. “Our gizmos and gadgets require vast quantities of fossil fuels, precious metals, rare gases, and all other elements and materials on the planet. They’re all running out and the methods of extracting them, refining them and then manufacturing our stuff from them is currently catastrophic for the environment.”

Part of the burden could be alleviated by using less and by not getting new cars and devices so frequently, he says. “Much of our demand for gizmos and gadgets is borne of vanity driven by clever marketing of products with engineered obsolescence. This must change. Anyone who thinks it doesn’t need to is profoundly irresponsible.”

Flynn and his PhD student Russell Banta work on developing sustainable materials and technologies in a bid to fix some of the damage that humans have inflicted on the planet. That includes using materials from seaweed to clean up the environment, making tough new antimicrobial fabrics inspired by deep-sea hagfish slime and using naturally occurring materials in seafood waste to make films and coatings for electronic microchips.

There also needs to be a public willingness to change behaviour as new inventions alone can’t save the environment, notes Flynn.

“There is a worrying trend towards thinking that scientists and engineers are going to save everyone from the consequences of our societal behaviour. This is a very costly solution and may not even work,” he says. “The simplest way to make a big dent in the issue of climate change is simply to consume less. We need to take personal and collective responsibility, not just pass responsibility on to science and carry on with our irresponsible behaviour.”

Science for Sustainability is organised by Yeast Research UCC and runs at St Peter’s Cork, from November 11th to 19th as part of Science Week. Click here to register for a place at evening talks. , see https://www.eventbrite.ie/e/science-for-sustainability-tickets-38835723695