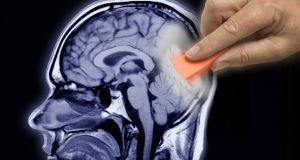 An MRI image of the brain of a patient with Alzheimer’s.

A chemical in cannabis could treat pancreatic cancer, it was reported in August. A Harvard study demonstrated that it could even kill cancer cells from elsewhere in the body.

Unfortunately, there’s a catch, which the news report at Yahoo Lifestyle hinted at in the final paragraph: preclinical studies are up next. This is code for this study coming from lab animals, not people, and the next step will be in animals too. There’s little chance of patients getting a new drug any time soon.

Such news stories pushed scientist Dr James Heathers to set up a Twitter account, @justsaysinmice, where people poke fun at hype in science news. Dr Heathers, a physiologist at Northeastern University in Boston, started it because he would read interesting news about research, but then be underwhelmed by the original scientific paper.

A recent example: a news headline warned that hospital lights could increase risk of death in patients with heart disease. The study was in mice. Conflating results from rodents and people frustrates patients and families. “Imagine what it’s like to be told we are going to have a fantastic new cure for Alzheimer’s, when your father has Alzheimer’s, and then there continues to be no good therapeutic options,” Heathers says.

While science has cleared Alzheimer’s in mice, there is still no treatment for people, despite billions of euro spent by drug companies. This isn’t that surprising. The mouse brain is quite different from ours, and mice don’t get Alzheimer’s. Scientists must genetically tweak the mice to give them hallmarks of the human disease.

Animal studies are still crucial for developing new drugs, but the jump to patients is expansive. An exciting discovery in lab rodents is usually a decade and a billion dollars away from a drug. Suggesting a treatment is close is a way of hyping the early science.

Each month, Prof Malcolm Macleod, brain scientist at the University of Edinburgh, sees a patient in his neurology clinic who asks him about a new treatment they read about in the news. “I go find the scientific paper and it turns out to be much less promising,” he says.

Exaggeration is not all the fault of news hacks. In 2014, a British Medical Journal study found that many exaggerations in UK newspaper stories originated in press releases from universities. They found that one in three press releases exaggerated the inference to humans from animal research.

The press releases from Trinity College Dublin and the Royal College of Surgeons in Ireland stressed the need for new tuberculosis drugs, but did not note that human subjects were not involved in the research. The approach was novel, exciting even – it sought partly to support the body’s own immune response to TB.

“It’s a really good scientific paper,” says Prof Stephen Gillespie, TB expert at the University of St Andrews in the UK, “but they now need to show it works in an animal model.” A treatment in patients is “many, many years away,” he says.

Usually scientists would not call an approach at this stage “a treatment”. The road ahead is long and bumpy. The FDA in August approved a new drug for TB, Pretomanid, which was originally developed in the 1990s.

Today, university press releases read like news articles, describing a discovery in engaging language, with quotes from scientists. The package is often repeated verbatim in news reports, without scrutiny.

“There’s huge effort put into promoting science, much of it appropriate and ethical, and some of it not so much,” says Brian Trench, writer and science communications researcher. “There’s a vastly smaller effort put into checking promotional material for authenticity and accuracy.”

Trench says most media don’t have the resources to scrutinise claims from universities, such as a discovery being a true breakthrough. “[Critical scrutiny] tends not to happen on anything like the scale that might be the case in other areas of journalism,” he adds.

In January, a researcher went on RTÉ’s News At One to discuss the TB paper. The focus was on the delivery of “the drug molecule” via an inhaler and how it could help patients.

More advanced preclinical testing was promised for this “new treatment of tuberculosis”. It is questionable whether listeners could gauge that this meant the strategy is possibly five years away from first-in-human tests, and 10 years away from being on a prescription. If all goes well. The vast majority of drugs that get to be trialled in people fail.

One explanation for not being explicit about results from animals is that universities wish to avoid unsavoury attention from activists. Macleod says such caution as misplaced. “We should be open about what we do and be prepared to stand up and articulate why it is that we use [animal] models and what their limitations are,” he says. Rodent studies are part and parcel of biomedical research.

Developing a new drug is that tough. While there’s remarkable progress in treating many diseases, we are left with complex conditions that require huge collaborative efforts. The picture of constant breakthroughs by individual labs is misleading. “We need to be honest in what we can and cannot do,” Macleod says.

“Science is hard to do,” says Heathers, who is concerned that “science is being collectively devalued because we are doing a bad job communicating where everything is at and how well it works.” Exaggerated reporting of science, in his view, runs the risk of creating a perpetual attitude of distrust in science that is harmful to science, researchers and society.