Cats bond with their owners in similar way to dogs, study finds 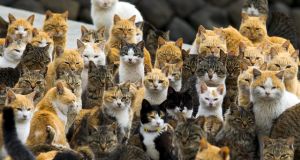 Cats are not always known for being the most friendly of pets, but we may be wrong about their aloof and independent nature.

Contrary to popular belief, domestic cats form bonds with their human owners in a similar way to babies and dogs, according to a new study.

Scientists put each cat in the study in an unfamiliar room for two minutes with their caregiver, followed by two minutes alone, before reintroducing the person for another two minutes, to see how the cat behaved.

When their owner returned, about 65 per cent displayed signs of being less stressed and balanced their attention between the person and their surroundings, known as “secure attachment”.

Others showed traits of avoidance, with “insecure attachment” indicators such as twitching their tail and licking their lips.

“In both dogs and cats, attachment to humans may represent an adaptation of the offspring-caretaker bond,” said Kristyn Vitale, a researcher in the Human-Animal Interaction Lab at Oregon State University.

“Attachment is a biologically relevant behaviour.

“Our study indicates that when cats live in a state of dependency with a human, that attachment behaviour is flexible and the majority of cats use humans as a source of comfort.”

Kittens who participated in the study were also put through a six-week socialisation training course to see if there were any major differences, but no change was noticed.

“Once an attachment style has been established between the cat and its caregiver, it appears to remain relatively stable over time, even after a training and socialisation intervention,” Ms Vitale added.

“Cats that are insecure can be likely to run and hide or seem to act aloof.

“There’s long been a biased way of thinking that all cats behave this way. But the majority of cats use their owner as a source of security.

“Your cat is depending on you to feel secure when they are stressed out.”

The test, published in the Current Biology journal, is similar to previous work with primates and dogs. – PA