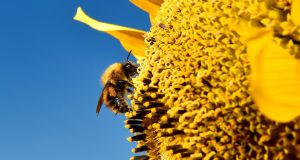 Pity the giant panda. The undisputed face of 20th century wildlife conservation has been shunted off its pedestal by a lowly insect. Can you guess which? Like pandas, they’re fuzzy and cute, but with extras: they love flowers, they’re a critical part of the coffee supply chain, and common enough to be seen by pretty much everyone on planet earth. They can even fly.

Yes, we’re talking bees. But what’s the image that springs to mind? For most people, it’s probably something that looks like a bumblebee, makes honey like a honeybee, and lives in a hollow twig in a bee hotel like a leaf-cutter bee. Unless evolution has done something insanely cool and the scientists haven’t realised yet, such a bee does not exist.

Misunderstanding this wildly diverse group of insects means that we also misunderstand how best to protect them.

Of the many obvious differences between bees and giant pandas, one in particular stands out: the words giant panda mean a giant panda – there’s only one. The word bee is in fact an umbrella term for more than 20,000 different types of insect, with a dizzying variety of needs and wants. Most of them are neither fuzzy nor cute, don’t live in hives or bee hotels, are physically incapable of stinging people, don’t die if they try, and don’t make enough honey to share with the likes of us. But they all like flowers, so that’s something.

Of the 20,000 different variety of bee in the world, 99 live in Ireland and a third of those are threatened with extinction. Despite the proliferation of posts on Facebook suggesting otherwise, this third does not include the honeybee. Honeybees (who live in hives, sting people and die afterwards but are not yellow and fuzzy) are housed by beekeepers, fed during the lean months and tended to when sick. Scientists aren’t particularly worried about them.

Indeed, the renowned pollination ecologist Professor Jeff Ollerton summed it up when he wrote, “Keeping hives to save the bees is like keeping chickens to save the birds”. It’s also likely that the uptake in hive ownership has meant that wild bees, who need the most help, face more competition for flowers in the landscape – especially in towns and cities and might also be at increased risk of disease.

Seventy-seven of the Irish 99 are solitary bees, and most of them are small, brown, unfuzzy and antisocial. Some live in the insect equivalent of a one-bed apartment: a solitary bee nesting aggregation looks like somebody got a bit carried away poking chopsticks into an earthen bank. Others live in gaps in walls, piles of grass cuttings or hollowed-out timber. While 10 of them will live in bee hotel-type structures, they don’t like the big ones, or the ones that have been doused in decorative paint and varnish, and they definitely shouldn’t live in old ones, which can be the equivalent of a Victorian tenement in terms of disease and lice. Twenty-one of the 99 are bumblebees. Some are yellow and fuzzy, others aren’t, but all are sociable, and – for the most part – they live in vacated mouse holes under the ground, hence their preference for messy hedgerow understories, hummocky grasses and abandoned waste ground.

Given each species’ bespoke requirements, it might be surprising to know that there is one easy way to help them: more flowers. But even this deceptively simple solution requires some myth busting. Take the packets of bee-friendly native Irish wildflower seed sold in the garden centre. Unless you’re buying directly from one of two specialist (and relatively hard to find) suppliers on the island, these seeds – native or otherwise – are not actually Irish. By sowing them, gardeners risk corrupting the genetic integrity of our unique wild stocks (this issue is a column in itself).

Worse again are seed bombs, which are jam-packed with genetically foreign seed and, if imported pre-made, could also contain bacteria and viruses that damage Irish biodiversity. Plants have spent thousands of years learning to spread seed in the most ingenious ways – all we need to do is give them room to grow and stop cutting them down, not try to out do them at seed dispersal, and especially not with non-Irish and potentially pathogenic stock.

To save the bees, as for much of nature, the best thing we can do is make some space for wildness – in our gardens, parks, fields and forests – and let them look after themselves.