How long has the science of forecasting weather been around?

Weather predictions and folklore are probably as old as human society 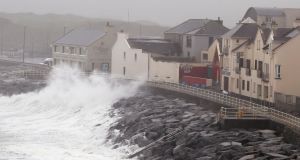 Waves crash agains the sea wall in Lahinch, Co Clare as thousands of homes and businesses were left without power as Storm Lorenzo passed across Ireland. Photograph: Brian Lawless/PA Wire

The twitter response to Met Éireann’s recent forecasting around Storm Lorenzo encapsulated much of our views of weather forecasting in general. There were the doubters and the critics, people who looked out their window and declared that this was “much ado about nothing”. And then here were the chancers, hoping for a day off work – “Cmon lads cancel Friday ffs” .

Many people cited the “big wind” non-event as a reason for doubting Met Éireann. Nonetheless, there were the few supporters who pointed out that in fact the forecasting had been pretty accurate this time.

We may not take it too seriously, but in a country that loves to talk about weather many of us are avid consumers of the weather forecast. Folklore about how to predict the weather based on observations of, for example, animal behaviour, is probably as old as human society. But how long has the science of forecasting been going on?

According to astrologers, each planet or celestial body had certain characteristics that determined the type of weather it would bring

Medieval scholars tried to use astrology to predict weather. They linked the locations of particular planets in the sky with weather events such as heavy rain or strong winds. According to astrologers, each planet or celestial body had certain characteristics that determined the type of weather it would bring when it was positioned in the sky in a way that amplified its influence on earth.

Where a planet was in relation to particular constellations of stars or to the other planets would help to define how influential it was on the weather. As health and disease was often linked to weather, physicians were interested in how the alignment of the planets might affect outbreaks of disease.

Historian Stuart Jenks has noted that this kind of weather prediction showed little care for the economic impacts of weather events and was more an intellectual endeavour for educated elites. In other words, no farmer was using the alignment of Jupiter and the moon to decide whether to cut his hay this week or not.

By the middle of the 19th century there were a great many more instruments to draw upon when predicting the weather and there was a much greater focus on the economic potential of weather forecasting. For European governments in particular, the central importance of shipping to national economies and the maintenance of empires provided an impetus to the development of meteorology and particularly storm prediction.

In the United Kingdom, Admiral Robert FitzRoy (former commander of HMS Beagle) was appointed head of a meteorological service managed by the Board of Trade. Initially the meteorological department simply collected weather reports from ships and tried to help train ships’ captains so that they could avoid (or prepare for) dangerous weather en route. But FitzRoy was soon trying to use his accumulated data to predict weather patterns and to prevent disasters at sea when ships encountered unexpected storms.

By the 1860s, FitzRoy had developed a basic system of weather forecasting for the waters around the UK in which predictions were shared between stations using the telegraph. Wind measurements and barometric pressure were collected from stations along the coast and used to calculate storm warnings.

These stations then displayed flags devised by FitzRoy in order to inform sailors of the weather. Such predictions were basic, not indicating that a wind of a particular strength would come from a particular direction. Nonetheless, they proved extremely useful to sailors and FitzRoy believed they had a significant impact in preventing wrecks and loss of life.

Just like our modern weather forecasting system, FitzRoy faced a number of critics. He was not a scientist and the theory underlining his storm warning and weather predictions was hazy at best.

Scientists such as Francis Galton attacked his methods and demanded that the storm warnings and other weather forecasting be suspended until a more scientific means of prediction could be developed. Galton created a critique of FitzRoy’s accuracy that, historian Jim Burton has suggested, may have distorted the picture to suit his own purposes.

The storm warnings were temporarily suspended, but sailors were among the first to protest at the withdrawal of the service and they were eventually reinstated. Sailors, unlike Galton, were willing to endure the occasional mistake because in general forecasts improved their ability to do their jobs safely. Fortunately weather forecasting and long-range modelling have become much more reliable in the meantime.