‘Fruit juice may be as bad or worse than soft drinks’ 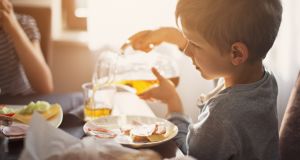 Parents should encourage kids to eat fruit, not drink the juice. Photograph: iStock

Sugary drinks are about to be hit with a sugar tax of 60 cent per two-litre bottle. The beverage industry argues that obesity is a far more complex problem than sugary drinks, which is true. But is the tax justified?

“Sugary drinks are the low-hanging fruit. They give no benefit, but have all these negatives,” says Prof Barry Popkin, a distinguished professor of nutrition at the University of North Carolina and leading advocate for this tax around the world. The Wisconsin native has advised health authorities in China, Brazil, Spain, the UK, South Africa, Colombia and Mexico on taxing sugary drinks. Many introduced taxes for drinks with added sugar, but Popkin argues that pure fruit juices should be next.

Scientific evidence points to the sugars in liquids being stealth calories: our body doesn’t see them and we carry on eating. Popkin says scientific studies now show that fruit juices are not as healthy as we might assume. “Fruit juice may be as bad or worse than soft drinks,” says Popkin. “Parents shouldn’t be giving them to their kids.”

Some countries are already countenancing a fruit juice tax. South Africa included a trigger clause in its sugary drinks tax law so that it will also apply to fruit juice if consumption shoots up. A calorie is still a calorie, but your body deals with liquid and solid calories differently. You could easily gulp down the juice of five apples without feeling full, but try munching through five apples.

“A liquid calorie has no satiety effect and it causes a rapid rise of sugar and then insulin in the blood. Insulin is a hunger hormone, so it can feed into the cycle of making you feel more hungry,” says Prof Donal O’Shea, HSE lead for the management of obesity. “And insulin is a hormone that encourages weight gain.” He advises parents to minimise liquid calories for kids and plugs water and milk as the best options.

O’Shea has been an advocate of the sugar tax for the past seven years. He hopes it will bring home the point that liquid calories are bad and push industry to continue to reformulate its drinks with less sugar.

Popkin is hardline. “The fruit juice industry has capitalised on this healthy aura of fruit, but we are now building up the literature to be able to defend a fruit juice tax,” says Popkin. Around 35-40 per cent of kids in Europe consume as much fruit juice as others consume soft drinks. “It would really benefit them to have it taxed,” says Popkin. Many fruit juices contain more sugar than Coke.

He speculates that it might go back to our hunter-gatherer past and need for regular fluid intake. The body can survive without food for weeks, but going without a drink is fatal after a few days.

A disease of the brain

Not every obesity scientist agrees that the sugar tax will work. Obesity researcher Prof Carel Le Roux at University College Dublin doesn’t have a problem with taxing sugar, but warns that we shouldn’t be disappointed if it makes no difference to obesity levels. “Obesity is a disease of excess hunger,” he says. It is a brain disease, and is not due not a lack of moral fibre.

Eighty per cent of the genes associated with obesity are in the central nervous system. Obesity involves neurons in the deepest recesses of the brain misfiring, which causes people to be hungry and to therefore seek out calorie-rich foods, says Le Roux. Drugs that reduce hunger allow people to lose weight, but work in only one in three people. The UCD prof says that we need to find treatments that make people feel less hungry. He would like to see the sugar tax revenue devoted to treating obesity.

For O’Shea, the tax is all about stopping or at least slowing Ireland’s rising obesity levels, especially in children. Parents should encourage kids to eat fruit, not drink the juice. “I hate nanny state activities, but I was a fan of the plastic bag tax because it changed how people behaved. I supported the smoking ban because it saved lies,” says O’Shea. “The sugar drinks industry is targeting kids [with their marketing]. As long as that happens, we need to act.”

DIET SOFT DRINKS IN THE DOCK

The jury is out as to the merits of diet drinks. New studies suggest that their artificial sweeteners cause the body to anticipate a surge in blood sugar. This then triggers a flow of the hormone insulin. When no sugar arrives, our appetite perks up and this path leads to weight gain.

Not everyone sees these studies are a slam-dunk. “I am not massively convinced by the evidence, overall,” says obesity expert Prof Donal O’Shea. Still, he is no fan of diet drinks, pointing to their additives and preservatives and lack of nutrition.

He describes the scientific literature on diet drinks as controversial: some studies ignore what people eat, and there are two distinct groups. One group chooses diet drinks but also eats fast foods and has an unhealthy diet generally.

“An unhealthy eater that uses diet beverages as a rationale for eating unhealthy foods will still be an unhealthy eater and the diet drinks won’t matter much,” says Popkin. “For those who have a healthy diet, however, it reduces the risk of all sorts for heart disease, diabetes and weight issues.”

Popkin says much of the evidence against sweeteners comes from rodent studies, which he says are not ideal, since rats and mice go crazy for anything sweet. Other scientists believe the animal studies point in the right direction. On the bright side, one indisputably healthy option is vegetable juice, which has far less sugar in it, though kids seem to realise this quickly.

1 Coronavirus: More ‘striking’ evidence BCG vaccine might protect against Covid-19
2 Eccentric Thai king’s flying visits ensure a colourful German lockdown
3 Genetics shed light on origins of Irish strains of Covid-19
4 Donald Trump’s clown car administration has put the fear in all of us
5 Irish doctors on getting Covid-19: ‘In 90 minutes, I deteriorated quite rapidly’
Real news has value SUBSCRIBE