The Sun is an active star, continuously erupting with giant explosions, such as bursts of radiation called solar flares. These flares can have significant effects on the Earth’s atmosphere. Video: NASA Goddard 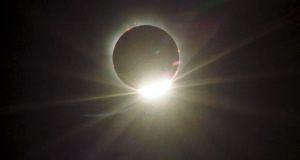 Irish researchers have discovered new evidence of how big disturbances in the atmosphere around the Sun, which is 150 million kilometres away, impact on the Earth within minutes.

With the help of Nasa in the US, a team of scientists from Trinity College Dublin, investigating the connection between bursts of radiation called solar flares and activity in Earth’s upper atmosphere, made the breakthrough.

Led by PhD researcher Laura Hayes in TCD’s Astrophysics Group and her advisor Prof Peter Gallagher, they discovered pulses in the electrified layer of the Earth’s atmosphere – called the ionosphere – mirrored X-ray oscillations during a flare that occurred in July last year.

The Earth’s atmosphere is closely coupled with the sun which provides the heat and energy that drives our climate and weather patterns and ultimately provides the conditions for life here on Earth.

The sun is also an active star and is continuously erupting with giant explosions, such as solar flares. Understanding such incidents is important as as they can impair high frequency communications and navigation around the globe.

The ionosphere is an ever-changing region of the atmosphere that reacts to changes from both Earth below and space above. It stretches from 60 to 1,000 kms above the Earth’s surface, and swells in response to incoming solar radiation, knocking sub-atomic particles known as electrons out of nitrogen and oxygen gases.

When the sun shines this ionizes atmospheric gases, which can then transmit charges in the way X-rays conduct radiation. At night, there is a relaxation of this process as charged particles gradually recombine.

The Trinity team looked at how the lowest layer of the ionosphere, called the D-region, responded to pulsations in a solar flare. “This is the region of the ionosphere that affects high-frequency communications and navigation signals. Signals travel through the D-region, and changes in the electron density affect whether the signal is absorbed, or degraded,” Ms Hayes explained.

The scientists used data from very low frequency (VLF) radio signals transmitted from space to Maine in the US and then received at Trinity’s observatory at Birr Castle, Co Offaly.

Their results are published in the Journal of Geophysical Research.

Ms Hayes added: “This result shows the Earth’s atmosphere is more closely linked to solar X-ray variability than previously thought. Now we plan to further explore this dynamic relationship between the sun and Earth’s atmosphere.”