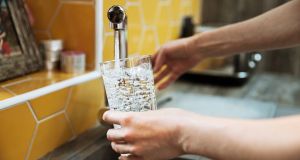 Forthcoming legislation is expected to oblige water companies to monitor the levels of microplastics in drinking water. File photograph: iStock

The impact of plastic pollution in our oceans, on our coastlines, in our soils and ultimately in our food and water has become a hot topic for environmentalists around the world – and, increasingly, for public-health specialists.

British broadcaster and natural historian David Attenborough’s Blue Planet series highlighted how sea creatures and fish species were dying from becoming entangled in plastic debris or eating microplastics. Yet in spite of all this attention on plastic pollution, we still know very little about the impact of micro- and nanoplastics on the human body that arise from the fragmentation of plastics down to a sub-micrometre scale.

“Huge knowledge gaps exist regarding the uptake and fate of plastic particles in micro and nano dimensions in humans as well as their impact on human health,” says Chris Elliott, professor of food safety at Queen’s University Belfast (QUB) and founder of the Institute for Global Food Security.

A recent study by researchers from Trinity College Dublin (TCD) discovered how high levels of microplastics are released from infant-feeding bottles during sterilisation and the preparation of baby formula.

The research by Dr Jing Jing Wang, Prof John Boland, Prof Liwen Xiao and others published in the Nature Food journal found that polypropylene infant-feeding bottles can release up to 16 million microplastics and trillions of smaller nanoplastics per litre.

Sterilisation and exposure to high-temperature water significantly increase microplastic release from 0.6 million to 55 million particles when temperature increases from 25 to 95 degrees. The study authors recommended that infant formula should be prepared with water at 70 degrees in a non-plastic container, cooled to room temperature and then transferred into a high-quality plastic sterilised infant-feeding bottle.

Polypropylene is one of the most commonly used plastics in lunch boxes, noodle cups, kettles and infant-feeding bottles yet despite its widespread use this TCD study was one of the first in the world to demonstrate its capacity to release microplastics.

“Our study indicates that daily use of plastic products is an important source of microplastic release, meaning that the routes of exposure are much closer to us than previously thought. We need to urgently assess the potential risks of microplastics to human health,” says Liwen Xiao from TCD school of engineering.

A new international study with researchers from the Institute of Global Food Security at QUB sets out to train researchers to develop technologies to monitor concentrations of micro- (0.1-1000 micrometres) and nano- (less than or equal to 0.1 micrometres) plastics in water for their presence, uptake and threat to animal and human life.

This Monplas study monitoring micro- and nanoplastics is led by Aston University in Birmingham and will include researchers from nine universities with partners in technology, food and beverage companies.

“The data from 14 PhD students will provide new scientific data to enforce current guidelines or inform policies that need to be changed,” adds Elliott who is a co-leader of the Monplas study at QUB.

The principal aim of Monplas researchers will be to improve our ability to detect, trace the origin of, determine the toxicity and ultimately eliminate micro- and nanoplastics from water.

Forthcoming legislation as part of revisions to the European Commission’s drinking water directive is expected to oblige water companies to monitor the levels of microplastics in drinking water.

The Monplas researchers aim to develop the technology and scientific instruments which will allow food and beverage companies to test their products for the presence of micro- and nanoplastics. The four-year research project also hopes to provide the groundwork for similar instruments which could be used to monitor their presence in sea water, air and foodstuffs.

A 2015 review of micro- and nanoplastics and human health by Tamara Galloway at the University of Exeter found the migration of contaminants from food packaging into food is one of the main routes of human exposure to contaminants in plastics. Yet only a small fraction of the thousands of substances that may be present in this packaging has been tested.

Human bio-monitoring (using blood, breast milk, saliva or urine) is one way of measuring the concentrations of environmental contaminants and/or metabolites (substances formed during metabolism) from micro- or nanoplastics and the chemical additives used in their manufacturing.

The national health and nutrition examination survey in the United States reports on several chemicals associated with the use or production of plastics, including bisphenol A, phthalates, styrene, acrylamide, triclosan, brominated flame retardants and their concentrations in the general population. The European Environment Agency is currently identifying priorities for research with member states and the European Commission for a future European bio-monitoring initiative.

Some researchers suggest more study into the impact of chemical additives – stabilisers, plasticisers, flame retardants, pigments and fillers – on the human body is urgently required so additives with long-term toxicity can be replaced.

Other researchers suggest the degradation of plastics caused by ultraviolet light, heat, mechanical and/or chemical abrasion is potentially more hazardous to human health than the chemical additives used in the manufacturing of plastics.

In reality, the dangers to human health – particularly to the detoxifying organs of the liver and kidney – could result from the interaction of a cocktail of chemicals in the human body.

“We have been using plastics for a relatively short time and we have [seen an] unexplained rise in health issues during that time,” Elliott explains. “There is a correlation between the rise of use of plastics and the increase in cancers but is it causative?”

There is also growing evidence of increased human infertility – particularly male infertility – and we know that some micro- and nanoplastics mimic female hormones in the male body. “There has been a huge amount of work on these endocrine disrupters but we don’t know what level of exposure is dangerous. The Monplas study will look at the biological effects of a whole range of micro- and nanoplastics,” he says.

Microplastics in food is a topic of increasing concern among European Union citizens according to the 2019 Eurobarometer on food safety in the EU commissioned by the European Food Safety Authority. Its 2020 scientific colloquium on the human health risks of micro- and nanoplastics in food has been rescheduled for next May due to the Covid-19 pandemic.

The authority has defined limits for additives within plastics intended for packaging use. It also has detailed guidance for assessing the risk of exposure to nanomaterials used in the food chain and acknowledges there are huge uncertainties associated with detecting, identifying and characterising different micro- and nanoparticles and polymers in food even when constituent substances are known.

Monplas researchers aim to set the “research road map” not just for detection of tiny plastics in water but also in beverages, food, soil and air.

Only when studies like these unravel the complex interactions of micro- and nanoplastics with human organs, will we begin to understand the potential damage they cause to humans. At the very least, this new scientific data will no doubt herald changes to how plastic packaging and containers are manufactured and used in the future.

Students who attended gathering to ‘face suspension’, UL says 16:42
Troops to be vaccinated before overseas deployment after Taoiseach’s intervention 16:00
Nphet considers asking all arrivals to give samples for Covid-19 genomic sequencing 15:53
Investment of €1.38bn required to protect Irish habitats – Cabinet told 15:51
Flooding ‘not an issue’ at most bog rewetting sites, committee told 15:50