How does Santa deliver billions of gifts in one night? Quantum physics . . . 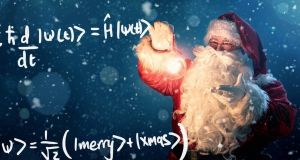 It was always known Santa Claus used the best technology and most advanced science to make what seemed impossible happen – the delivery of so many gifts to children around the world in a single night.

But one question has always bugged the best scientists: How on Earth does he visit all those different places within such a short period?

As that magical time of the year again approaches when Santa Claus will set off on his merry way, that familiar question surfaces yet again, but scientists at Trinity College Dublin have thrown new light on how it is made possible.

In many sceptics’ minds Santa seems to defy the laws of physics. But for quantum physicists there is no issue. The most modern theory, according to Prof John Goold and Dr Mark Mitchison, based in TCD school of physics, is that Santa Claus is in fact exploiting quantum mechanics to deliver the gifts, and there is much to suggest this is the case.

In a nutshell, quantum mechanics allows objects – including Santa, Rudolph and co – to be in many places simultaneously. That is the key ingredient, which allows for his extraordinarily efficient delivery on Christmas Eve.

Quantum physics describes the basic building blocks of the stuff we can see around us. It explains almost everything we understand about the world: how the sun shines, why metal looks and feels different from plastic or wood, and very many other things.

But quantum physics also makes some bizarre predictions, starting with the fact that objects can be in “superposition” – meaning they exist in many different places at the same time!

Prof Goold explains: “Experiments show that these weird states describe tiny things – like atoms – but also much larger things too. In fact, an important part of our job as physicists is trying to put bigger and bigger objects into superpositions, which we think will help us to build ultra-fast computers and a more secure Internet in the future. But we still haven’t learned to do it as well as Santa can!”

For quantum physicists, he says, there is little doubt now that Santa is exploiting, “what we know as ‘macroscopic quantum coherence’, which is precisely the same resource used by cutting-edge quantum technologies to outperform technologies based on classical physics”.

Historically the idea an object can be in a macroscopic superposition has led to controversy. In fact, many scientists over the years have questioned if quantum physics can really be true. Probably the most famous critic was Albert Einstein, who helped to discover quantum physics over 100 years ago but then spent the rest of his life arguing it was incomplete.

However, an intriguing rumour circulating since Einstein’s time is that he hated Christmas (basically, the rumour, which may or may not have originated at the North Pole, implies he was a Grinch who didn’t like Santa Claus). Even after sparking a revolution in physics and establishing himself as the smartest man in history, Einstein still wasn’t as famous as Santa, Prof Goold notes.

Green with envy, some believe Einstein tried to discredit Santa by arguing quantum superpositions were impossible so no one could possibly visit all the children in the world in one night. Nowadays, scientists don’t take Einstein’s ideas about quantum physics seriousl,y and it is widely accepted that superpositions are real – along with Santa Claus.

Even if we agree that Santa uses quantum physics to bring gifts to all the children in the world on the same night, we still don’t understand exactly how he does it, the scientists admit.

“When we observe a quantum object, we only ever find it in one place at a time. This tells us that superpositions are very fragile. Just looking at them causes them to ‘collapse’, which means the object ends up in just one place and all the other possibilities vanish,” Dr Mitchison adds.

“We are pretty sure that Santa has developed some advanced technology to protect his quantum superposition and stop such a collapse from ruining Christmas. But – just in case – we advise children the world over to go to bed early on Christmas Eve and suggest they don’t try to catch a glimpse of him and risk collapsing his merry superposition!”