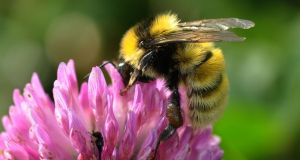 In 2004, two scientists took on a mammoth task: to systematically survey every county in Ireland for bees. They figured it would take them two years, but within months they realised that something was terribly wrong.

The scientists, Dr Úna Fitzpatrick and Dr Tomás Murray, were new to the subject, and the idea of taking on an all-Ireland bee census was pioneering. They searched the historical data on Irish bees and two names cropped up: Arthur Stelfox and Prof John Breen, now retired from the University of Limerick.

Stelfox worked in the National Museum of Ireland in the 1920s, and he was the first person to scientifically record bees in Ireland. When Stelfox died in the early 1970s, a Cork man called John Breen was studying wood ants in Tipperary. Breen was mad about bees. He would travel the hedgerow-dense roads on a Yamaha 50 motorbike; if he spotted a bee, he’d pull over. “I was collecting bees everywhere, putting them in boxes and recording where I found them,” he says. “I’d stop at the side of the road and find nine species on one patch.” Today, he adds, he’d be lucky to find two or three.

Breen built a valuable record. In 2004, Murray and Fitzpatrick went through his boxes and extracted the data. Armed with Stelfox’s and Breen’s records, they got to work. Fitzpatrick would survey the south and east of Ireland; Murray would take the rest. What emerged was a sorry tale of decline and loss.

Fitzpatrick went to the Clare coast to search for the Great Yellow Bumblebee, a remarkable species which Breen had regularly spotted. “I was shocked,” she says. “We expected to find it, but the habitat had gone because of urbanisation and the development of golf courses.” Fitzpatrick mentions six other species that Stelfox and Breen had commonly seen. “We barely saw them at all,” she notes.

Murray was having similar problems in Roscommon. Bee numbers were low. It was as if he had stumbled into a rural village after a wave of emigration, only to find a handful of people left. He looked for the little Shrill Carder Bee, which makes a loud, soprano buzz –“you hear it before you see it”. Stelfox had recorded it in many areas. Murray found it once.

In 2006, Fitzpatrick and Murray published their findings. Half of all species were in decline.

Today they sum it up in a sentence: a third of all bee species in Ireland will be extinct by 2030.

Some bees are declining so rapidly that Prof Jane Stout of Trinity College fears we are facing a “silent spring” of loss. It’s a staggering prospect as we are only beginning to grasp the consequences. They are our great unpaid pollinators. If they go missing, then what?

We have just one honeybee species in Ireland, and it’s doing okay. Scientists say it’s more like livestock than wildlife; farmed in hives, it will be fine as long as beekeepers are around. It’s the decline of our other bees – we have 21 species of bumblebees and 75 species of “solitary” bees – that’s so dramatic.

These bees inhabit an astonishing world of complex behaviours. Consider the bumblebees. They beat their wings 8,000 times a minute. They can fly when loaded down with pollen and nectar that doubles their body weight. One species has gravity-defying swoops of orange hair on the top of its face, a bit like Donald Trump. Another has a long, horse-like face. The Aran Islands has its own bespoke bumblebee found nowhere else in the world.

These sociable and hairy bees live a short life. They hibernate over winter in the soil; scientists think they prefer cool north-facing banks, but they aren’t sure. The bumblebee queen emerges in spring to build a nest in the ground. She produces sterile female workers who live for the common good and keep the colony fed. Her second load of offspring, male drones, have one purpose: to mate with virgin queens. Then they die.

So-called solitary bees pack a wallop when it comes to pollination; one bee does the work of hundreds of honeybees. Many of these species are in decline and some, like the Dark Nomad Bee, are extinct. It was last seen on a summer’s day in Dublin in 1902.

New species of solitary bees have appeared. The dark blue Violet Carpenter bee arrived in Waterford in 2007 but the reason it’s here is because temperatures are increasing; a vivid example, scientists say, of climate change in action.

The same is true of the Wool Carder bee, first seen in 2015. It’s unique among solitary bees for having a rampant sex life; males are at it every 35 seconds. He ferociously patrols his flower-rich territory, armed with spikes on his body to tear intruders apart. He will make an exception when a female Wool Carder flits in, but there can be a whiff of #metoo in his approach – he will grab her and have his way, whether she wants it or not.

Theories abound to explain the decline of our bees: urbanisation; the intensification of agriculture; the toxic impact of pesticides; our “tidiness” culture which has caused the disappearance of flowers and weeds. Bees are hungry and homeless, starved of protein-rich pollen and sugary nectar. The flowers just aren’t there; the bees are exhausted from trying to find them.

The rapid changes in farming – from extensive to intensive, mixed to monoculture – have sounded the death knell for many species. Ireland’s grass-based farming system is a problem. Seven million cows graze on thick swards of shiny ryegrass, but according to Breen it’s useless for bees. “Intensification of our farming is the key issue,” he says. “It has taken a toll.”

There are glimmers of hope. The “Ginger Spice” of the bee world is the Tawny Mining Bee which has a mass of bright red hair. It was presumed extinct until a few years ago when it was spotted in Kilkenny. It nests in gardens and feeds on flowering hedgerows, and scientists hope that this ginger bombshell will be found elsewhere. Could it be that if we all look we will find other long-lost species along the way?

We know that bees are moving westwards to the flower-rich grasslands and bogs. They do well in the Burren, where farmers are paid to produce biodiversity as well as food. But land in the west is under pressure from a publicly-funded scheme which has kick-started a forestry boom in places like Leitrim. Farmland which would be great for bees is being planted up with sitka spruce, a tree which is terrible for bees, says Fitzpatrick.

Ireland has long had a network of native hedgerows; they are the thick green veins of our country-side. Bees love them. Tipperary dairy farmer John Fogarty, who is a near-expert on wild bees, is alarmed by the pace at which they’re being cut down. “If I look out my window I can see a man working on the land 10 miles away. Years ago, when the hedgerows were high, you just wouldn’t see that.”

It’s a death by a thousand cuts. Take pesticides. When bees drink low levels of pesticides in nectar they behave like a drunken uncle at a late-night party. They go missing, and take ages to do simple tasks like eating. Pesticides leave them out of their minds.

Dr Dara Stanley is an international bee expert who runs her eponymous lab in NUI Galway. She attached radio tags to the backs of bumblebees and fed half of them low levels of pesticides. She found that bees exposed to pesticides were going on longer foraging trips than those not exposed, and were bringing back pollen less often. “Whatever they were doing, they were not foraging,” she adds.

There is evidence organic agriculture can have benefits for bees, while “we need to find ways to use chemicals more sustainably and more carefully”.

What can be done? In 2015 officials in the Department of Agriculture told farmers they would pay them if they left a tonne of sand in the corner of a field, and also put up bee boxes around the farm – actions they said would help solitary bees. The department has spent over €1.6 million of public money on these actions. Will it make any difference? Scientists doubt it – some are privately scathing about the measures.

In 2015, the All-Ireland Pollinator Plan was set up by Dr Fitzpatrick and Prof Stout. They have come up with 81 evidence-based actions they say will benefit bees. For example, Waterford City and County Council sowed a meadow in the city and the Larger Carder Bee, which had not been seen in years, appeared. The scientists said they’re “overwhelmed” by the positive response from the public. But their €15,000 grant from the Department of Agriculture has long been spent.

It’s a common theme. Fitzpatrick and Murray now work in the National Biodiversity Data Centre in Waterford. It’s in desperate need of secure, long-term funding. There’s an urgency to this – the latest data shows bumblebee numbers have fallen 14 per cent since 2012.

Bees are clinging on but they face a barrage of man-made hazards. They have no protection under Irish or EU law. They are not on anyone’s political agenda. But the evidence is clear: we need to step back from the chemicals and respect our hedgerows; re-wild our spaces and stop killing every weed we see.

Bring back the flowers, say scientists, and the bees will return. Sounds utopian?