The shady backstreets of scientific publishing 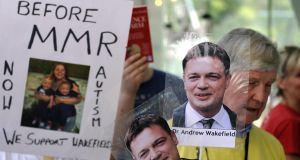 Supporters of Dr Andrew Wakefield, the doctor at the centre of the MMR scandal, outside the GMC in London in 2010. Photograph: Tim Ireland/PA Wire

A tour of the mean streets of science was offered in Trinity College Dublin recently by Ivan Oransky, the award-winning medical journalist and keen observer of misdeeds in science.

The New York native spoke about his website Retraction Watch, set up in 2010 to shine a light into a dark corner: scientific papers pulled after publication because of “unreliable results”. That can be a euphemism for all sorts of skulduggery.

“It is not a highlights tour, like going to see the Empire State Building or Times Square in my home town,” is how Oransky described his talk. “It is more like meeting in an alley after midnight and going to see the unsavoury parts.”

About one in five retractions are due to honest mistakes such as major miscalculations, but many others are down to unsavoury practices. “It is rare, but in science people do commit fraud,” Oransky explains. “People decide it might be easier just to make things up.” Some fake data or images, some sabotage colleagues’ experiments, others plagiarise the work of colleagues, or try publish the same research again.

Often there is personal drama and sometimes jaw-dropping misdeeds or bitter acrimony behind a terse retraction notice in a publication. Oransky joined with medical journalist Adam Marcus to set up Retraction Watch, inspired by revelations about Scott Reuben, an influential US researcher who simply invented patients for all his clinical trials. Reuben went to prison for healthcare fraud.

Oransky was then a science reporter at the magazine Scientific American and suggested to Marcus that they set up a blog. “This [Reuben case] reminded me that retractions were often a good source of stories, often hiding in plain sight,” he adds.

Usually scientific papers are retracted and an opaque or mealy-mouthed explanation is published. A bit of digging can unearth a human interest story with all sorts of shenanigans, Oransky told his audience at the Long Room Hub in Trinity.

Take the case of Karel Bezouska, a once respected scientist in the Czech Republic whose experiments came under suspicion when they could not be repeated. A video camera recorded him breaking into a lab to manipulate samples in a fridge, most likely to get the results he wanted.

With such juicy revelations, the Retraction Watch blog snowballed. “We were off to the races from day one,” recalls Oransky. They had expected a few dozen retractions a year, whereas the actual number is about 1,200. Their database now holds 17,000 retractions. Retracted papers are relatively rare, given about 2 million scientific papers are published every year.

To understand why papers get retracted it is important to know that science relies on a system of “peer review”– usually three experts in a field review a research paper. They say whether the paper deserves to be published, highlight mistakes or suggest additional experiments. Authors then address these concerns. The process is not flawless. After a paper is published, more scientists read it online; more than in the days of print-only journals, which means more observers.

“Lots more people have access to papers now. There are more eyeballs on this,” Oransky notes. There are also websites now where scientists can comment on scientific papers – such as pubpeer.com. He has also written about individuals who take on a Dark Knight garb, seeking out statistical fraud. He dubs them “sleuths”, or they call themselves “data thugs”.

Scientific fraud wastes research time and money, but fakery can cause harm. In the 1998, a paper falsely linking MMR vaccines with autism (from the now discredited author, Andrew Wakefield) helped kindle mistrust in vaccines using falsified results. It took 12 years for the prestigious journal The Lancet to retract Wakefield’s paper. Researchers in Ireland have made it on to the Retraction Watch database too – the website has 39 Irish retractions.

Oransky criticises incentives in science: “What lies behind a lot of retractions is the publish or perish pressures. In many places the only thing that matters in terms of getting tenure is publishing papers in [prestigious] journals.” More focus should go on the quality of research, originality of ideas and methods used.

Retraction Watch is sometimes criticised for airing science’s dirty laundry in public, and for bolstering those who would like to cut public funding of science. Oransky’s response to this is emphatic: “Why give them ammunition by claiming that science is perfect, when it isn’t?” Efforts to spotlight misdeeds will tackle the problem in a transparent way, he adds.