Carlo Rovelli on Schrödinger, God and physics being ‘better than LSD’

‘I don’t think anyone knows where the universe came from, and I think we just have to accept that’ 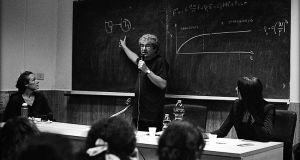 Physicist and author Carlo Rovelli: ‘what is very typical of science is that the more we learn the more we don’t know’

Leading physicist and author Carlo Rovelli, whose work has been translated into 41 different languages, is back with a new book, The Order of Time. Rovelli has a lifetime of experience in the field of quantum gravity – a theory aiming to unify the two great 20th century triumphs of general relativity and quantum mechanics. He is the best-selling author of Seven Brief Lessons on Physics and Reality Is Not What It Seems.

The Order Of Time is about the history of our understanding of time. He brings the reader on a historical journey through ideas about the topic, from Aristotle to Einstein, and beyond into the 21st century where today quantum mechanics is heavily involved. Rovelli also has an interest in philosophy, and in the book he hints at what the emerging ideas about time might mean for human existence. The book is published this month.

In an exclusive interview he spoke to Conor Purcell:

In The Order Of Time you talk about the idea that time is much more multifaceted than we think. Can you explain?

I think this is the main message of the book: the concept that time can no longer be understood as a single notion. Part of the reason for this is that we human beings – because of our size – can only observe macroscopic variables, and not the microphysics of things. So, the observations we make are clearly time oriented, but only because there is heat involved; time orientation is related to heat and statistical mechanics.

Putting it all together, our perception of time is related to this macroscopic perspective, the idea that we can only see a statistical view, rather than the world as it really is. But time itself would disappear at the molecular level, where the past and future become equally determinable – meaning there would be no apparent difference between past and future.

75 years ago, in 1943, Erwin Schrödinger gave a now famous lecture entitled ‘What is Life’ at Trinity College Dublin, where he discussed quantum theory, biology and philosophy. He spent 14 years in exile in Ireland as head of the Dublin Institute of Advanced Studies. Can you comment on how his teachings have influenced science?

Schrödinger was not just a major figure in physics, but also in molecular biology. The people who went on to further develop the theory of DNA were in many ways under his spell. I have been reading the conferences that he gave in Dublin during that time, and they are quite beautiful. They clearly show a person of great culture – he was a very wide-minded person.

I have also recently criticised Schrödinger quite strongly, because in his early work on quantum mechanics, in the introduction of the wave function, I believe he claimed to understand too much. In my opinion this misled the field of physics a bit. But amazingly, later on Schrödinger admitted this error. He was an absolutely clear thinker, including in recognising the weaknesses of his own work.

What are your thoughts on the life and work of the late Stephen Hawking?

I have been influenced by Stephen’s ideas and I use the result of his work in my own research. More importantly, I have great sympathy for his extraordinary human adventure. He showed the world that one can have a great life even without the control their own body, and also without believing in God or the afterlife. I admire him. Unfortunately, the press has presented him as a new Newton or a Galileo, which certainly he was not: Hawking was one of the good physicists of his generation, not the universal genius the popular press has depicted. It is a pity, because this confusion fogs the memory of a remarkable man.

You write that “rebellion is perhaps among the deepest roots of science: the refusal to accept the present order of things”. How much do you think that you yourself have been driven by an urge to retaliate against given norms?

For me, quite a lot. I come from that generation which in the late 1960s and early 1970s was very much rebellious. It was a time of big dreams, with intentions of building a more just world. I was immersed in that culture. To some extent it was a failed revolution – the world did not go in that direction at all. So, at one time there was a moment in my life when I became disappointed by that, and in that moment I fell in love with science. What attracted me was that in science you can make real change – you can make revolution, in ways that can be even easier than in the “real” world of politics. In fact in science you must make revolution in order to see further than before.

At what stage did you become interested in physics, and how did you choose quantum mechanics to be your avenue of investigation?

Quite late. I was not one of these kids who was crazy about science at a young age. I went to university and started studying some physics, but I was not particularly attracted to it at that stage. At that time I was interested in politics and other things that young people are interested in. It was only in my later university years, while studying general relativity and eventually quantum mechanics, that I thought to myself this stuff is better than drugs – better than LSD.

At the time I remember reading a review paper by British physicist, Christopher Isham, which explained the problem of quantum gravity. I found the problem fascinating, and right there and then I knew that I wanted to study it for the rest of my life. I have since done so, and I feel that it is a privilege to be involved in science, doing what I love to do.

In the final chapters of the latest book, you discuss what quantum mechanics might mean for our experience of being alive, discussing these topics quite philosophically. I am wondering what your thoughts are about the existence of a God?

Well, I think one of the reasons people buy my books is because I discuss matters beyond science. I do not believe in God, since you ask explicitly. Not because I think I know the answers, and that people who believe in God don’t know them. It’s because I know that I don’t know the answers, and I am aware of this ignorance. I don’t think there should be an arrogance in pretending to know everything, and I struggle to understand how people can be so sure they know about God. For some people it comes natural to think there must be something behind it all.

So, going beyond religion and ideas about gods, what can we think the universe is at all?

There are things we know now that we did not know in the past, and learning is a great experience. I think we have learned a lot. But what is very typical of science is that the more we learn the more we don’t know. I don’t think its disconcerting. I don’t think anyone knows where the universe came from, and I think we just have to accept that. We must accept to live at least partly in ignorance, but nevertheless remain absolutely curious.

Conor Purcell is a science journalist with a PhD in earth science. Some of his other articles at cppurcell.tumblr.com – Twitter: @ConorPPurcell