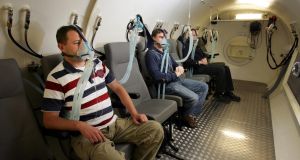 It appears that major effects of ageing at the cellular level and at the level of human cognition can be reversed by breathing pure oxygen while sitting in a pressurised chamber. Some very exciting research was recently published by Yafit Hachmo and others in the journal Ageing during November, and by Amir Hadanny and others published in same journal last July. Prof Shai Efrati of Tel Aviv University, leader of this research, was interviewed about his work in the the Timesof Israel.

Telomeres are analogous to the metal caps located at each end of a shoelace. The function of these caps is to prevent the laces from fraying and this is also the function of the telomere. Each time a chromosome duplicates itself the long DNA string shortens at its telomere ends. After many cell divisions the telomeres disappear and chromosomes are no longer able to duplicate themselves – the cell becomes senescent and dies. Telomeres are essential to normal cell functioning and the shortening of telomeres is associated with ageing. Telomeres can be visualised as clocks that measure biological ageing in cells.

Hyperbaric oxygen therapy (HBOT) is a medical treatment used to treat decompression sickness, carbon monoxide poisoning, delayed radiation injury, diabetic wounds, gangrene and other infections in which tissues are starved of oxygen. The therapy involves breathing pure oxygen through a mask while sitting in a hyperbaric oxygen chamber at air pressures 1.5 to three times normal atmospheric pressure. The goal is to fill the blood with enough oxygen to repair tissues. The recent studies published in Ageing were designed to determine if HBOT can reverse major indicators of ageing – shortening of telomeres, appearance of senescent cells and decline in cognitive functioning.

Thirty-five healthy adults over 64 years of age were administered HBOT using 100 per cent oxygen in an environmental atmosphere over one atmosphere. The HBOT treatment was carried out for 60 days, five days a week in individual 90 minute sessions. Participants were asked to remove their masks for five minutes every 20 minutes, thereby bringing their oxygen levels back to normal. The body interprets the fluctuating oxygen content as lack of oxygen (hypoxia) and turns on mechanisms that enhance cell regeneration.

Telomere lengths, measured in blood cells, increased on average by 20 per cent over this 60-day HBOT treatment and numbers of senescent cells reduced by up to 37 per cent. It also triggered significant improvements in cognitive function – improvement in attention, information processing speed and executive functions and MRI brain scans before and after treatment showed associated enhancement of cerebral blood flow. Taken at face value, the combined effect of the lengthened telomeres, decreased numbers of senescent cells, improved cognition and cerebral blood flow indicates a 25-year reduction in the biological age of recipients of the HBOT treatment.

Of course, much research must now be carried out to tease out the significance of this work. First, the work must be repeated with much bigger patient numbers and under more tightly controlled circumstances. For example, the control group in the cognitive performance part of the study was given no exercises during the 60 day treatment as opposed to the HBOT-group who had an intense programme of daily meetings. These meetings and social interactions may have contributed to their cognitive improvement.

Other studies have shown high intensity endurance exercise lengthens telomeres, but not to the same extent demonstrated by HBOT. Will telomere lengthening in adults enhance longevity? There are good reasons to think so, but only time will tell. There is a distinct correlation across species between rates of telomere shortening and longevity – (Kurt Whittemore and others, Proc. Natl. Academy Sciences US, July 23rd, 2019).

This work from Israel is undoubtedly exciting, encouraging hopes that treatments will emerge to significantly slow down ageing.