A pioneer of climate modelling – and maths 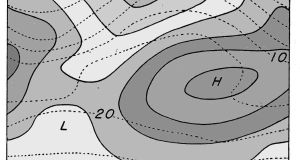 Phillips’s simulation of a developing unstable wave in the atmosphere. While at the Institute for Advanced Study in Princeton he made the first computer simulation of the global climate

Today we benefit greatly from accurate weather forecasts. These are the outcome of a long struggle to advance the science of meteorology. One of the major contributors to that advancement was Norman A Phillips, who died in mid-March, aged 95. Phillips was the first person to show, using a simple computer model, that mathematical simulation of the Earth’s climate was practicable.

Born and raised in Chicago, Phillips enlisted in the army air corps during the second World War. He was stationed in the Azores, struggling to make accurate forecasts for the Allied forces. These years sparked a lifelong passion for improved weather prediction. After the war, he returned to Chicago, where he earned his BSc in meteorology in 1947 and his PhD in 1951. His doctoral studies contributed to the development of the reliable forecasts that we enjoy today.

The first automated forecasts, made in 1950 using the ENIAC computer, treated the atmosphere as a single layer. But the development of weather systems depends on the vertical structure. Phillips devised a two-layer model that accounted for this and enabled storms to grow in intensity through a process called baroclinic instability. He found, starting from a quiescent initial state, that large wave-like disturbances grew over a period of days, and these disturbances bore a close resemblance to the waves observed in the atmosphere.

In 1951, Phillips joined the Electronic Computer Project at the Institute for Advanced Study in Princeton. While there, he made the first computer simulation of the global climate, using a drastically simplified model with what John Lewis described as “an almost irreverent disregard for the complexities of the real atmosphere”.

Phillips’s simple model stratified the atmosphere into two layers and could represent the genesis of cyclones. The variables were the heights of two pressure surfaces. Through dynamical linkages, these determined the wind fields and the mean temperature. Just 500 numbers specified the state of the atmosphere. Current models use tens of millions of numbers to do the same job much more precisely.

Simple climate models have provided great insight into the general circulation of the atmosphere. Phillips’s one-month simulation opened up a new era in climate science. Developments of his computer model have greatly helped us to understand the transports of heat and moisture that determine the Earth’s climate. The Royal Meteorological Society awarded the first Napier Shaw Prize to Phillips. His work had a galvanising effect on the meteorological community. Within 10 years, there were several major research groups modelling the general circulation of the atmosphere.

In 1956, Phillips moved to the meteorology department at MIT, and in 1974 became principal scientist at the National Meteorological Center in Washington. He won many awards for his research and, in 1976, he was elected to the National Academy of Sciences in the US. He made many other substantial contributions to the prediction of weather and climate using numerical methods and models.

The threat of climate change looms large today. We cannot be certain how the future will turn out, but the best means we have of anticipating changes is through Earth System Models; the direct descendants of the simple two-layer model used with such effect by Norman Phillips in 1956.

I had the privilege to meet Phillips – known to all as Norm – at a conference in Potsdam in 2000 and greatly enjoyed his company and his brilliant insights into complex aspects of the Earth’s climate system.

Peter Lynch is emeritus professor at the UCD school of mathematics and statistics – he blogs at thatsmaths.com