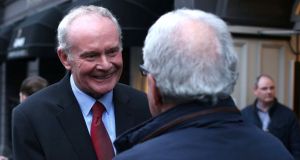 Taoiseach Enda Kenny said he was sorry to learn that Martin McGuinness has decided not to contest the forthcoming Northern Ireland Assembly election due to his poor health.

Speaking in Davos, he said: “While Martin and I may not always have seen eye-to-eye on every issue, I readily acknowledge the remarkable political journey that he has undertaken.

“I know that Martin remains firmly committed to delivering a peaceful and prosperous society for all of the people of Northern Ireland. ”

Mr Kenny described him as one of they key architects of the Belfast Agreement, and a tireless and committed champion of the peace process.

British prime minister Theresa May noted that Mr McGuinness served the people of Northern Ireland as deputy first minister for nearly a decade.

“We recognise his work over many years securing a number of significant political agreements. He played a key role in moving the republican movement towards a position of using peaceful and democratic means. I want to send him best wishes for his retirement,” she said.

“We will all continue to work to make sure that the people of Northern Ireland are able to live freely and in peace,” she added.

Secretary of State for Northern Ireland James Brokenshire thanked him for his work in securing a number of significant political agreements, as well as his service as deputy first minister of Northern Ireland.

Following Martin McGuinness's announcement of his retirement from politics, people in Derry turned out at his home to pay tribute to him pic.twitter.com/M366o2grVZ

Minister for Foreign Affairs Charlie Flanagan, in Belfast for a meeting with Mr Brokenshire, said: “Martin was unstinting in his personal efforts to secure the stability of the powersharing institutions in Northern Ireland and to advance reconciliation between the unionist and nationalist communities.

“As the holder of a joint office, he fully recognised that his duty was to represent all of the people of Northern Ireland.

“Through word and deed, Martin sought to reach out to those who - for understandable reasons - would have regarded his past with fear, anger and suspicion.”

Fianna Fáil leader Micheál Martin also paid tribute to Mr McGuinness and said he hoped “those assuming leadership roles in Sinn Féin in Northern Ireland will learn from his example over the last 10 years”.

“I will not pretend to agree with many of the positions which he has taken over the last 40 years,” Mr Martin said. “But I believe he has sought to be a constructive force in trying to make the post-Good Friday Agreement institutions work.”

Sinn Féin leader Gerry Adams said: “I want to express my heartfelt thanks to Martin McGuinness. He and I first met over 45 years ago behind the barricades in Free Derry and we have been friends and comrades since that time.

“We were all shocked when we saw his appearance recently. Thank God he is looking a lot better since then and responding well to the treatment he is receiving. However, he does need to take time out to get better for himself, for his family and for our struggle,” Mr Adams said.

Ulster Unionist Party Leader Mike Nesbitt said: “Martin McGuinness’s politics are very different from mine, but there is no escaping that he has been a major influence over the 10 years since the DUP decided to work with Sinn Féin in Stormont Castle.

“His decision to take up arms in the IRA and terrorise the people of Northern Ireland has left a legacy we are still struggling to come to terms with. That said, he is clearly unwell and I wish for him and his family what I would wish for myself and mine.”

“People who disliked and hated each other’s politics had to work with one another respectfully. He showed how that could be done,” she said.

“People had to believe in a shared future. He certainly has contributed hugely to the circumstances in which that became possible and then lived out through everyday life and everyday politics,” she told RTÉ 1’s Six One news.

“He turned out to be a very able politician.”