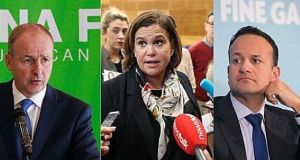 Fianna Fáil and Fine Gael are the State’s two biggest political parties, according to opinion polls, followed closely behind by Sinn Féin. All three are closely bunched together in terms of the support they enjoy.

Last week’s Irish Times/Ipsos MRBI poll put support for Fianna Fáil at 25 per cent, Fine Gael at 23 per cent and Sinn Féin at 21 per cent. A Red C in Sunday’s Business Post had the parties on broadly similar levels of support.

These polls make a combination of two of these three parties the only possible stable coalition government not requiring the support of smaller parties if these results were to be repeated in the February 8th election.

Sinn Féin president Mary Lou McDonald had the second highest approval rating of the party leaders – at 34 per cent, she was just one percentage point behind Fine Gael leader Leo Varadkar, according to the Irish Times poll.

Why does Fine Gael not want to enter government with Sinn Féin?

Taoiseach Leo Varadkar has said Sinn Féin is “not a normal party”. The party’s decision making “involves consulting” with an ard chomhairle (ruling executive), he said, and he pointed to key decisions in the North that “are not necessarily made by elected politicians”.

What is he referring to?

Mr Varadkar is referring to emails sent between party officials in 2017 that shows Sinn Féin’s then finance minister Máirtín Ó Muilleoir asking for the consent of senior republican Ted Howell, a long-standing confidante of former Sinn Féin president Gerry Adams. Howell, Sinn Féin’s director of foreign affairs during the Troubles, acted as a go-between on behalf of the IRA leadership and senior Irish American figures in the 1990s during the early days of the peace process.

What did the emails show?

The emails dated back to January 2017 and were sent at the height of Northern Ireland’s so-called cash-for-ash scandal over a costly renewable heat incentive scheme. In one email, Mr Ó Muilleoir asked Mr Howell, a key republican negotiator and a member of Sinn Féin’s ard chomhairle, if he would “be content” if he signed off a business plan to reduce subsidies in the renewable heating scheme, reducing its cost to the public.

Were other republicans consulted by the party’s former finance minister?

Yes. At this time, Mr Ó Muilleoir during his deliberations on the scheme consulted Padraic Wilson and Martin Lynch, who have been described as “two of the IRA’s most senior republicans”.

Did others express concern?

Emails that emerged in the inquiry into the cash-for-ash scandal showed one senior Northern Ireland senior civil servant raising concern that Mr Ó Muilleoir “may be acting under instruction”.

Is this a reason why Fianna Fáil will not enter into government with Sinn Féin?

Yes, it is the most fundamental reason. Fianna Fáil leader Micheál Martin has said: “I could never be sure with Sinn Féin in terms of who you are dealing with. Is it unelected officials in Belfast who rule the roost, who control the levers of power within that party?”

Does Martin have other concerns about the role of the IRA in Sinn Féin?

Yes. He has pointed to the 2015 assessment of the Police Service of Northern Ireland – repeated in November – that the IRA army council still retains an oversight of Sinn Féin. Referring to Mr Ó Muilleoir’s interactions with senior republicans, Mr Martin said that it would be “unconscionable in the Irish constitutional set-up that a minister for finance would be beholden to non-elected party officials before he or she could make a decision”. Mr Martin has said he believed Sinn Féin’s representatives were not in control of the party and that decisions were being made by “shadowy figures” and “unelected officials”.

How has Mary Lou McDonald responded to all of this?

She has likened Mr Ó Muilleoir’s backroom consultations to any government minister seeking the advice from a political adviser within their party as part of a “collective democratic structure”. She has dismissed the concerns of Mr Varadkar and Mr Martin as “a complete contrivance” and “an absolute try-on”.

The rival parties were “desperately reaching for any reason just to give a rationale for keeping us out,” she said. She has dismissed it as “something about nothing” and “a measure of their absolute determination, maybe even desperation to cast a slur or cast doubt”. She has denied the party was being run out of west Belfast. “Nobody’s pulling my strings,” she said. On Sunday Ms McDonald denied that Mr Ó Muilleoir may have been acting under the instruction of others.

Does Sinn Féin have close ties to the militant past of the IRA?

Yes. Several senior figures within the party participated on IRA active service during the Troubles. Martin Ferris, who has been a Sinn Féin TD for Kerry since 2002 but is not seeking re-election in this election, was sentenced to 10 years in prison for IRA gun-running by the non-jury Special Criminal Court in the 1980s. He was criticised for meeting Pearse McAuley, one of the IRA men convicted of killing Det Garda Jerry McCabe in Adare, Co Limerick in 1996, after he was released from prison in 2009.

Dessie Ellis, the oldest candidate standing for Sinn Féin in this general election, served 10 years in prison on explosives charges in the 1980s. Ellis, a former television repair man from Finglas, has acknowledged he was involved in the IRA “at the highest levels” during the Troubles. After being extradited to the UK in the 1990s, he was acquitted of charges relating to causing explosions in Britain between 1981 and 1983. Ellis, now 66, became a member of Dublin City Council in 1999 and has represented Dublin North-West as a TD since 2011.

Are there other things Fianna Fáil and Fine Gael don’t like about Sinn Féin?

Yes. Fine Gael and Fianna Fáil object to Sinn Féin’s policies on the economy, trade and other areas. Mr Martin has said that Sinn Féin take “a very negative approach” to multinational companies and free trade agreements. Fine Gael claim Sinn Féin is interested in populism and isolationism, and want to impose taxes that impose costs on business and reduce demand in the economy.

Any other notable areas of opposition?

Yes. Mr Varadkar has said that Sinn Féin has consistently opposed the Special Criminal Court, which the State uses to imprison dissident republicans and people involved in organised crime. He has questioned this policy at a time when the State is struggling to deal with violent gang crime.

Has Sinn Féin’s position on the court changed in this election campaign?

A little. During the campaign, Sinn Féin has stepped back from its full opposition to the court; it now says that the court should be reviewed, rather than scrapped, if Sinn Féin is elected to government. Mary Lou McDonald has said that the court was “not unproblematic”.

Are the parties divided on other hot-topic issues in this election?

Yes. Sinn Féin wants a border poll on Irish unity in light of the UK’s decision to leave the EU when a majority of people in Northern Ireland wanted to remain. The party has made a border poll within five years a precondition for joining a coalition government. Fine Gael and Fianna Fáil have rejected this. The Taoiseach has said that it would be “defeated and divisive”.

Despite their divisions with other parties, is Sinn Féin growing in popularity with the public?

Yes – support for Sinn Féin surged by seven points in The Irish Times/Ipsos MRBI opinion poll since October and eight points in the Business Post/Red C poll since November. Sinn Féin’s deputy leader Pearse Doherty has been one of the most effective TDs in the Dáil. He has strengthened his profile with eye-catching committee performances as he questioned company bosses on the high cost of insurance, a key election issue. The party’s housing spokesman Eoin Ó Broin is another of the Dáil’s best performers with a comprehensive understanding of his brief, another key area of focus for voters in this election.