Who will win and who will lose in the constituency changes? 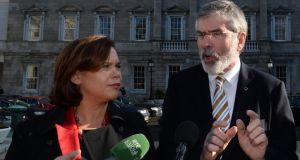 Sinn Féin TD for Dublin Central Mary Lou McDonald is likely to fight the next election as the party’s leader if, as expected, Gerry Adams stands down in advance. Photograph: Dara Mac Dónaill

Political parties are paying particular attention to four constituencies where the number of seats has changed for the next general election.

The three-seat Laois and Offaly constituencies are to merge to form a five-seater, while Cavan-Monaghan, Dublin Central and Kildare South will each gain a seat.

In past elections, results from these constituencies have been closely monitored by politicians and commentators to determine national trends.

Given the fragility of the minority Fine Gael-led Government, selection conventions in many constituencies will take place in the autumn.

The changes were recommended by the Constituency Commission, chaired by Mr Justice Robert Haughton, in a report earlier this year.

The number of TDs is to increase from 158 to 160, while the number of constituencies will be reduced from 40 to 39 due to the merging of Laois and Offaly.

In all, there will be 13 five-seat constituencies, 17 four-seaters and nine three-seaters.

Constituency changes: the two three-seat constituencies of Laois and Offaly are joined to form a five-seater.

One of the outgoing TDs is certain to lose a seat at the next election as the Laois-Offaly constituency reverts to type.

It becomes a five-seater again, as it was from 1923 to 2013, when the constituencies were redrawn.

The consensus is there are two Fianna Fáil seats, one seat each for Fine Gael and Sinn Féin, with the proverbial dogfight for the last seat.

Labour is considered out of the reckoning with the retirement from politics of former senator John Whelan, who failed to make a breakthrough for the party in Laois at the last election.

Laois-Offaly was once a jewel on Fianna Fáil’s electoral crown, guaranteed to yield three of the five seats when former taoiseach Brian Cowen was the local poll-topper.

Even in 2011, when the party was hammered nationally, and its share of the vote in the constituency fell by almost 30 per cent, Fianna Fáil managed to hold two of its three seats.

Fianna Fáil took the bulk of the vote in both constituencies in the last election, 35.06 per cent in Laois and 35.79 per cent in Offaly.

Barry Cowen, the party spokesman on the environment, and Fleming, chairman of the high-profile Public Accounts Committee, should retain their seats.

Flanagan, the current Minister for Justice, is hugely experienced and a senior party figure who might well have been party leader had he not lost his seat in 2002. He won it back in 2007.

Corcorcan-Kennedy was considered unlucky to have lost her junior ministry when Leo Varadkar took over as Taoiseach and Fine Gael leader. The sympathy vote in a general election should never be underestimated, particularly if voters go to the polls sooner rather than later.

Sinn Féin has painstakingly built a base in both counties. Nolan secured almost 11 per cent of the vote in Offaly the last time, showing herself to be transfer-friendly and securing the third seat.

She finished with 8,890 votes on the seventh count, with Fianna Fáil’s Eddie Fitzpatrick hot on her heels with 8,720.

Stanley, first elected to the Dáil in 2011, is much more established in Laois.

Although outpolled in first preferences last time by Flanagan, he was ahead of him, 10,092 votes compared with 9,525, when they both secured their seats on the third count.

Offaly had some high-polling Independents last time, as well as Renua’s John Leahy, now party leader. Leahy secured 4,596 first preferences, more than 10 per cent of the vote, but that was in an election where the party had a high profile nationally with candidates such as former Fine Gael junior minister Lucinda Creighton.

Leahy, a member of Offaly County Council, confirmed to The Irish Times he would be a candidate at the next election and the party hoped to field 39 candidates nationally. “The party had communications difficulties in putting forward policies the last time which were our own fault,’’ he said. “This will not happen again.’’

Constituency changes: increases by one seat, with population of 13,150 from Cavan in 36 electoral divisions transferred to Cavan-Monaghan from Sligo-Leitrim.

The extra seat allocated to Cavan-Monaghan, a four-seater last time, could pave the way for the return to the Dáil of Fine Gael Senator Joe O’Reilly.

He lost his seat in the last election to Smyth, having been eliminated on the eight count. He had polled an impressive 6,566 first preferences.

Reilly served in the Seanad before his election to the Dáil and his a highly experienced politician. His Cavan base is provides a geographical balance with sitting Fine Gael TD Heather Humphreys, who is based in Monaghan. Currently Minister for Culture, she topped the poll with 12,391 first preferences and was elected on the first count.

Both Fianna Fáil TDs are based in Cavan, but are strong performers and look secure.

The constituency is also a Sinn Féin stronghold, with Caoimhghín Ó Caoláin a TD since 1997, the first party representative to be elected to the House after it abandoned its abstentionist policy.

Last time, his running mate Senator Kathryn Reilly polled 6,066 first preferences and remained in contention until the eight of 10 counts.

Reilly, once a rising star within the party, has since left politics and it is back to the drawing board to find a runner next time with Ó Caoláin.

Sinn Féin’s local fortunes received a setback in June with the resignation from Cavan County Council of Eugene Greenan who represented the Cavan-Belturbet municipal district.

Constituency changes: it gains a seat with the transfer of a population of 12,394 from Dublin North West and 5,064 from Dublin Bay North to the constituency.

The political landscape has changed dramatically for Fine Gael Minister for Finance and Public Expenditure Paschal Donohoe in Dublin Central.

The expanded constituency, as well as his elevation to a powerful ministry, means he has moved from holding a marginal seat to copperfastening his local political base.

Donohoe’s election to the Dáil in 2011, after a spell in the Seanad, restored the party’s fortunes in a constituency that always represented a challenge for Fine Gael. It has large pockets of deprivation and is not natural Fine Gael territory.

He seemed vulnerable last time, given it had been reduced to a three-seater and he had been part of a government which imposed austerity. He survived, which was a tribute to his ability and dogged constituency work.

He is now secure, as is McDonald, who is likely to fight the next election as Sinn Féin leader if, as expected, Gerry Adams stands down in advance.

Independent Maureen O’Sullivan, if she runs again, will remain a formidable candidate, although she just about made it past the post last time.

She did well on transfers and managed to edge out Gary Gannon, of the Social Democrats, for the third seat on the 11th count. She was a mere 321 votes ahead of Gannon, who could well take a seat as the beneficiary of the expanded constituency next time.

Fianna Fáil will also be seeking to recover a seat in what was once a Bertie Ahern stronghold, yielding two seats for the party.

Will Mary Fitzpatrick, a candidate last time who deserves credit for dogged electoral determination, throw her hat in the ring?

There are likely to be others in the mix, with former Labour TD Joe Costello seeking to return to the Dáil, and Independent Christy Burke, a former lord mayor of Dublin.

Constituency changes: it gains a seat, with the transfer of Kildare population of 7,892 in the former Laois constituency, as well as 9,450 from Laois, 2,404 from Offaly and 3,226 from Kildare North.

Although extended by a seat, Kildare South remains a three-seater because of Ó Fearghaíl is automatically returned to the Dáil as Ceann Comhairle.

But the redrawing of the constituency could pave the way for the restoration of a Labour seat if the party’s fortunes improve.

Labour councillor Mark Wall, son of Jack Wall, who had a seat there since 1997, failed to retain it at the last election when the electoral tide went out for Labour. He polled 4,277 first preferences the last time and stayed in contention until the final sixth count.

The redrawing of the constituency means the strong Labour base of Monasterevin is again part of Kildare South which will boost Wall’s chances, if, as seems certain, he is the candidate, in what is likely to be a more favourable environment for the party.

Heydon, who is chairman of the Fine Gael parliamentary party, topped the poll last time, followed by O’Loughlin and then Ó Fearghaíl. Wall was next.

O’Loughlin, with a solid background of local work, did well to take a second seat for Fianna Fáil.

With Heydon and O’Loughlin considered safe, the battle is likely to be for the third seat between Wall and Fianna Fáil, which has yet to choose a running mate for O’Loughlin.

It will be an uphill battle for Wall, even if his father usually punched above the national weight for the party in general elections.

“Labour has to perform nationally as well as locally next time,’’ he said.