Taoiseach on DUP view on same-sex marriage: ‘I won’t be making any compromises’ 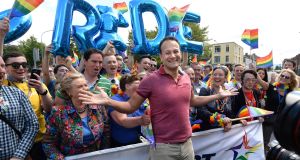 Taoiseach Leo Varadkar has confirmed he will attend the Pride breakfast event in Belfast on Saturday after meeting political leaders in Northern Ireland.

Asked if he was conscious of sensitivities with the DUP, which is opposed to same-sex marriage, Mr Varadkar said he would not be making any compromises for anyone.

“I won’t be able to attend the parade because I want to get back to Croke Park for the match,” he said, referring to the All-Ireland senior football championship quarter-final between Dublin and Monaghan.

“But I will attend the Pride breakfast on Saturday morning in Belfast to express my support for equality before the law for Catholics, Protestants, non-religious people, men, women, gay people and straight people. And I won’t be making any compromises about that for anyone really.”

Mr Varadkar said the main reason he was going North on Friday was to meet the leaders of the Northern parties, to make a speech at Queen’s University Belfast and to meet business, union and civil society leaders. It will be his first visit to Northern Ireland as Taoiseach.

When Mr Varadkar attended Dublin Pride in June he signalled an intention to support the cause of marriage equality in Northern Ireland, telling an audience that people in the North “do not have the same rights as we do”.

When he visited Downing Street later that month Mr Varadkar said it was a matter of when, not if, Northern Ireland would introduce equal marriage rights.

Asked about the DUP’s opposition to marriage equality, he said he had raised it with party leader Arlene Foster, and would continue to do so.

“It’s his own business. So long as he doesn’t interfere in the internal affairs of Northern Ireland who he meets is a matter for him,” he said.

“It is a testament to how far social attitudes have changed on this island that the marriage referendum was overwhelmingly passed and just two years later, the Republic’s government is led by an openly gay man,” he said.

Talks aimed at restoring the powersharing executive will resume in September.

Sinn Féin has blamed the DUP for the current deadlock, and accused the party of refusing to move on issues such as same-sex marriage, as well as the Irish language and a bill of rights for Northern Ireland.

The DUP has countered that Sinn Féin has delayed progress towards re-establishing the executive.