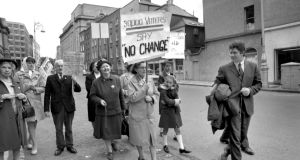 A group of demonstrators opposed to contraception pictured outside Leinster House in July 1974. Photograph: Tommy Collins

The two great failures of the first seven decades of the independent Irish State – the economy and the North – dominated politics in the 1970s.

Though there was a high degree of public fatalism about both, it did not prevent them from occupying a central place in the political and government affairs at the time.

The IRA organised and professionalised to deadly effect, while the British army quickly came to regard all Catholics as potential adversaries. The North became the most militarised part of western Europe.

As the violence intensified, the State came to perceive the conflict not just as a problem it had a responsibility to solve but as a direct threat to its own existence.

An array of special-powers legislation was enacted. The Garda sought to monitor all “subversives”, and elements of the force – “the heavy gang” – assumed a free hand to mistreat and even frame suspects.

The political establishment began the decade wondering what it could do to help nationalists in the North; it ended the decade struggling to ensure that the carnage north of the Border did not come south.

And yet there’s little doubt many people in the Republic felt a deep attachment to the idea of a united Ireland, and furthermore, believed that the British presence in the North was at the root of the problem.

One of his first acts was an infamous televised address to the nation on the state of the country’s finances. “As a community,” he lectured, “we are living way beyond our means . . . We will have to continue to cut down on government spending.”

The stunning hypocrisy would only become apparent years later. But as a statement of reality at the time, it was pretty much spot on. Mismanagement of the public finances had exacerbated traditional weaknesses, and international events and trends – the oil crisis, an international recession, and the stagflation that bedevilled western economies in the 1970s – had piled on the misery at home. Strikes were commonplace – the banks were closed for six months in 1970 – and inflation savaged real wages. Fianna Fáil and Fine Gael swapped office with little change in economic policy.

If the 1970s were supposed to be socialist, it soon became clear it was not going to turn out like that. A talented younger generation of Labour politicians saw their political ambitions – and some of their principles – flounder on the rocks of the Northern conflict and economic recession.

The 2½ party system was rigidly in place; the electoral choice was between a majority Fianna Fáil government or a coalition between Fine Gael and Labour; nobody contemplated another possible outcome.

Social changes related to the role of women, that had convulsed other western societies, were slow to come to Ireland. For most people, the certainties of Irish life remained broadly in place – the Catholic Church’s influence over politics and society was overbearing, to the extent that taoiseach Liam Cosgrave voted against his own government Bills to legalise the supply of contraceptives.

The legalisation of divorce was two decades away. Religious observance remained general. Official Ireland was monochrome and male.

The seeds of social and political change were evident if you looked hard enough – in the law, in the media, in popular culture.

But in the Ireland of the 1970s, for most people, things continued the way they had for their parents. This was true in politics, as it was in life.