His father’s son: Liam Cosgrave and ‘the boss’ 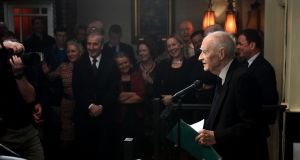 Former taoiseach Liam Cosgrave former taoiseach speaking on the occasion of the unveiling of a plaque celebrating the birth of WT Cosgrave in 2013. Photograph: Cyril Byrne 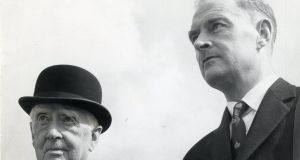 When Liam Cosgrave was born his father was in jail.

WT Cosgrave, minister of local government in the underground Dáil administration, had been on the run and was arrested in March 1920, a month before the birth of his elder son. It was his third and last term of imprisonment.

Young Liam’s first memory was of the smell of burning. His father, by now head of government as president of the executive council, took him to visit the family home, which had been set on fire and destroyed by republicans during the Civil War. He was moved to the safety of an Army barracks.

Four years later, the family was panic-stricken when Cosgrave returned late from Sunday Mass because of a punctured car tyre. News had come through that Kevin O’Higgins had been shot on his way to Mass and there were fears that the president, too, had been the victim of an assassin.

Liam and his younger brother Míceálwere brought up in the shadow of violence and murder. Nonetheless, the family background was harmonious and privileged. They lived in a large Georgian mansion with extensive grounds near Templeogue, in what was then the south Dublin countryside.

Although WT worked long hours, he was able to keep in regular contact with his sons. In fact, following the custom of the time, he normally went home for lunch.

The children were not isolated from current affairs. They accompanied their father to events such as the inauguration of the Ardnacrusha hydroelectric scheme. Before and after he lost office in 1932 his friends and colleagues called to the house to discuss current events. Liam acquired his interest in politics at an early age.

Shortly after he was called to the bar he decided to run for election to the Dáil – despite WT’s reservations.

He was one of the few new Fine Gael TDs elected in 1943, which was otherwise a disastrous year for the party. Subsequently he was able to provide his father with political news and gossip.

He and his family moved in to live with WT after he became a widower, and he was present when his father suffered a fatal heart attack in November 1965. They were always exceptionally close. Liam regarded WT with affectionate veneration, and even in his 90s would refer to his father as “the boss”.

It was not merely in their appearance and tastes that the two men resembled each other. Liam also absorbed WT’s deep commitment to parliamentary democracy and majority rule, even when (as was normally the case) the results were unwelcome. He was as unwavering in his hostility to the Provisional IRA, the enemy of the Irish State, as his father had been towards the republicans during the Civil War. Both men were prepared to be unpopular – and at times seemed almost to revel in unpopularity. Both were determined to give the people not what they wanted but what was good for them.

As Oliver Goldsmith wrote of Edmund Burke, they were “too fond of the right to pursue the expedient”.

Liam Cosgrave was his father’s son.