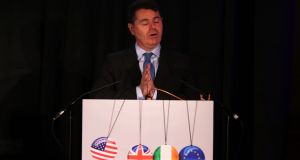 Serious Budget divisions have emerged between Government Ministers after the Independent Alliance failed to secure commitments on a number of their key demands.

Discussions yesterday between the Alliance and Minister for Finance Paschal Donohoe lasted less than an hour and were described as “tense” and “difficult”.

The Alliance members told The Irish Times they were “really annoyed, “disappointed” and “unhappy” with how little progress had been made on the measures they had requested.

The group, which consists of Minister for Transport Shane Ross and Minister of State at the Department of Health Finian McGrath, had sought a number of issues to be addressed in the Budget but received no commitment from Mr Donohoe at the meeting.

The Alliance had requested additional resources for carers, increased money for Housing Assistance Payments and a financial payment for stay-at-home parents.

The Independent Alliance has also proposed increasing gambling tax from 1 per cent to 1.1 per cent. It is estimated that would raise €50 million, which the group wants ring-fenced for addiction services.

The Alliance had expected commitments to be given at the meeting ahead of the announcement on October 10th.

One member of the group said the two sides “are in dispute over a lot of things” and are “not happy”.

Government sources insisted the Independent Alliance would have its fingerprints on the Budget but stressed there was a long road to go yet.

Mr Donohoe is still in negotiations with Fianna Fáil TDs Michael McGrath and Dara Calleary and is reluctant to make any promises until discussions have concluded, the source said.

Further discussions are scheduled between Mr Donohoe and the Alliance members next Monday and Tuesday.

The Alliance had also sought a full restoration of the bereavement grant, a once-off payment of €850 given to families to assist with funeral costs. It was abolished in 2014 by former minister for social protection Joan Burton.

It is understood the Minister indicated this is likely to proceed.

Meanwhile, Mr Donohoe has been holding a number of bilateral meetings with his Cabinet colleagues over recent days. He is scheduled to meet the Minister for Justice Charlie Flanagan today.