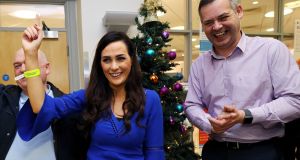 The outgoing Sinn Féin MP, Órfhlaith Begley, has been comfortably returned for the constituency of West Tyrone.

The solicitor, who will be 28 next week, was first elected an MP in the byelection held last year when her party colleague Barry McElduff resigned. She ended that poll 7,956 votes ahead of her nearest challenger, Thomas Buchanan of the DUP. This time around she had a slightly smaller though still clear majority over her DUP rival, winning 16,544 votes, 7,478 ahead of Mr Buchanan.

Ms Begley said that she was delighted with the result and that people had come out in their thousands to support Sinn Féin’s positions on Brexit and “Tory austerity”. She described the election as a “once in a generation” poll for a constituency that had rejected leaving the European Union in the Brexit referendum and had now, once more, voted against quitting the EU.

The third-ranked candidate was Daniel McCrossan, of the SDLP, who got 7,330 votes. The other candidates were Stephen Donnelly of the Alliance Party, on 3,979 votes; Andy McKane of the UUP, on 2,774; James Hope of Aontú, on 972; and Susan Glass of the Green Party, on 521.

Speaking at the count centre in Omagh, Begley’s fellow Sinn Féin TD Pearse Doherty said Brexit was bolstering the debate in Northern Ireland about Irish unity, with even unionist politicians saying the UK’s departure from the EU was now a threat to the union.