Two big questions in Midlands North West – can FF take seat and what of Casey? 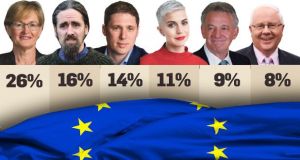 This isn’t really one poll – it’s three parallel polls conducted simultaneously in the three European Parliament constituencies using sample ballot papers that ask the respondents to fill out their preferences, just as they will on election day.

This is intended to mimic, in so far as possible, the actual act of voting, and therefore increase its efficacy as a predictor of voter behaviour. In the past ballot paper polls have proved an excellent indicator of the likely outcome of an election.

There is, of course, one big caveat – campaigns are dynamic, and things will change between now and election day. Some candidates will do better; some worse. A few may even do a lot better, or a a lot worse.

We can’t discount the effect of the poll itself in galvanising – or demoralising – candidates and parties.

As ever, it’s important to realise what polls don’t tell us as much as what they tell us. But all that having been said, this is as good a piece of political intelligence as we can muster two weeks before voters go to the polling stations.

So what do the numbers tell us?

First, Midlands North West. There are four seats and three outgoing MEPs looking for re-election (Independent Marian Harkin is retiring). Two big questions here – can Fianna Fáil take a seat in a constituency where, considering their support levels, they really should have an MEP, and what impact will Peter Casey have on the contest?

Last time out Fianna Fáil split the vote evenly and both its candidates got squeezed out. This time the party’s problem is, on the basis of these numbers, a more basic one: its candidates are not getting enough votes. With one candidate (Brendan Smith) on 8 per cent and the other (Anne Rabbitte) on 5 per cent, Fianna Fáil will need to get supporters here to come out and vote for their candidates if they are to take a seat.

Fine Gael’s Máiread McGuinness (26 per cent) is safe on the basis of these numbers. The party will seek to push her vote down and its second candidate Maria Walsh’s (11 per cent) up to give it a chance of a second seat.

Independent MEP Luke “Ming” Flanagan is also safe if he pulls in the 16 per cent suggested here, while Matt Carthy, the Sinn Féin candidate, is on 14 per cent, leaving him likely to hold his seat but vulnerable to a challenge.

That challenge could come from failed presidential candidate Peter Casey, who on the basis of these numbers is – just about – in the game on 9 per cent, but will need to grow his first preference vote substantially.

Ireland South will elect five MEPs, though the last one elected will have to wait until after Brexit to take his or her seat. Five seats means a quota of just under 17 per cent so on the basis of these numbers Fine Gael’s Seán Kelly’s seat is safe on 18 per cent, Sinn Féin’s Liadh Ní Riada (14 per cent) will see her vote fall sharply but will have enough to return to Brussels.

There will be one Fianna Fáil seat – probably Billy Kelleher (13 per cent), who leads his party colleague Malcolm Byrne (10 per cent) – and then the last two seats will be a scrap between Byrne, the remaining Fine Gaelers Deirdre Clune and Andrew Doyle and Independents 4Change TD Mick Wallace.

On 5 per cent each, neither Sheila Nunan of Labour nor Grace O’Sullivan of the Greens have enough votes to be competitive, though if O’Sullivan can generate political momentum out of public concern about climate change she could threaten Wallace or Byrne as the standard bearer of the southeast.

In Dublin, both Frances Fitzgerald (22 per cent) and Barry Andrews (18 per cent) look safe for two of the four seats. After that, there will be a ferocious dogfight for the last two between Lynn Boylan of Sinn Féin (13 per cent), Independents4Change TD Clare Daly (10 per cent), the Greens’ Ciaran Cuffe (9 per cent) and Alex White of Labour (8 per cent).

So what happens? On these numbers Cuffe is in fifth position with four seats to fill, but the Greens have traditionally pulled in transfers from all over the ballot paper – remember Eamon Ryan. was nearly elected here last time round.

Fine Gael will have spare votes and its transfers will be critical, but there are also lots of centre-left votes scattered around between Labour, Independent Alice Mary Higgins and the Social Democrats’ Gary Gannon. They may be more likely to end up with Cuffe than Boylan or Daly. That would leave these two fighting for the last seat.

Yet campaigning in the final fortnight, as voters begin to switch on to the election, will make all the difference.