‘Our lads are definitely the forgotten victims,’ says British army veteran of 1988 atrocity 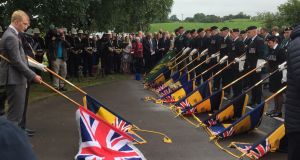 The 30th anniversary service for eight soldiers killed in the Ballygawley bus bombing, at which a new memorial was unveiled. Photograph: Michael McHugh/PA Wire

Hundreds of veterans, as well as relatives of those killed and the civilians and medical teams who came to their aid, attended a service at the roadside to mark the 30th anniversary of the Ballygawley bombing on Sunday.

Members of the Light Infantry had been returning from the airport to their base in Omagh, Co Tyrone, when an IRA bomb exploded as they travelled along the A5 at Ballygawley on August 20th, 1988.

A new memorial was unveiled yesterday, and wreaths and poppy crosses were laid at the scene.

Pte James Leatherbarrow said one moment he was sitting at the back of the bus, and the next he found himself trapped underneath its back axle.

“At first we thought we had a massive accident, that we’d hit something,” he recalled. “There’s a weird smell, because you can smell all the burning diesel and burning oil, and everybody is screaming and shouting – you’re just shouting for all your mates.

Pte Leatherbarrow was rescued by members of a band that had been travelling behind them.

Former Sgt Maj Stanley Wilkinson choked back tears as he recalled the night.

“You’re like a dad to the young lads and you do your damndest to look out for them. “When something like this happens, then you think, did you do enough?”

Both veterans are among a large group of former members of the Light Infantry who return to Omagh, often with their families, to mark the anniversary.

The band that came to the rescue 30 years ago performed at a private function for the regiment on Saturday. They came to Pte Leatherbarrow’s aid and helped lift the wreckage of the bus from his chest.

“If it wasn’t for them a lot more of them would have died that night,” he said.

Thirty years on, both men feel that the experiences of soldiers in the Troubles have been largely ignored.

“Our lads that were over here, they’re definitely the forgotten victims,” said Sgt-Major Wilkinson. “Everybody seems to remember the republicans who were blown up. I saw monuments today to IRA volunteers who’d blown themselves up, or who were shot by the SAS, but we’re just forgotten, or seem to be, and a lot of us feel the same.”

They also feel there is a lack of support for soldiers who were affected by the Troubles.

“It was probably the worst day we’d had as a battalion since the Troubles started,” says Sgt Maj Wilkinson. “It was just devastating, particularly with the ages of the victims, they were just young lads. It still affects us to this day.”

“I know now it’s PTSD but back in the ’80s it was not a thing to have. It was basically get on with it, get over it and get back out there.”

Pte Leatherbarrow was subsequently diagnosed with PTSD and tried twice to take his own life.

“I came back for the memorial for the first time five years ago, for the 25th anniversary, and I find it easier and easier,” he says. “It’s like healing for me.”