FF should back Government for an extra budget, Calleary says 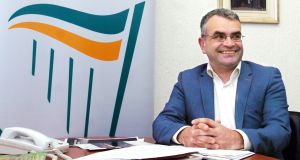 Fianna Fáil deputy leader Dara Calleary has warned Fine Gael to be ‘honest’ about where it has fallen down in housing and health. Photograph: Henry Wills

Fianna Fáil should support the Government for an extra budget if it agrees with Fine Gael to extend the confidence-and-supply deal that underpins the Coalition, the party’s deputy leader has said.

The Government and Fianna Fáil should agree one more budget than already envisaged if they extend the deal, the Fianna Fáil deputy leader has said.

The initial deal underpinning the minority government effectively ends after the next budget in October, the third of the Fine Gael-Fianna Fáil agreement, with a review process to follow thereafter.

If the deal is extended to take in another budget, the Government would likely continue in office until at least 2020.

However, Dara Calleary warned Fine Gael it must be “honest” about where it has fallen down in areas like housing and health when the review begins.

In an interview with The Irish Times, Mr Calleary, a Mayo TD who is also head of policy development for Fianna Fáil, stressed he would not “make any prediction” on whether the review will lead to an extension to the current deal, insisting that Fine Gael must be open to criticism.

However, he added: “I personally believe – and this hasn’t been discussed – if we are extending, it has to be for a measurable period. That there is a timeline during that period during which we can assess policy. There is no sense in having an extension for the sake of it. At the end of the day, you are talking about people’s lives.

“If it is to be extended, and we haven’t even opened a discussion yet, I think certainly another budget. But we are a long way off that position yet.”

Some in Fianna Fáil are opposed to any such extension, while others believe a short-term extension should be offered to get Ireland through the Brexit talks, and the official date of Britain’s withdrawal from the EU in March 2019.

Taoiseach Leo Varadkar recently proposed that both parties agree the next election be held in summer 2020, which would mean another budget being introduced in October 2019. Mr Varadkar also wants the review to begin before the next budget.

Fianna Fáil leader Micheál Martin has already said his party’s commitment to facilitating budgets includes the passage of associated legislation such as finance and social welfare Bills. This process usually takes a number of months, which would likely push an election into 2020.

Mr Calleary insisted the review would be “robust” and would have to take in policy areas such Brexit, health and housing among other issues. His party will be pushing for a €100 million affordable housing scheme in the budget to add to previous Fianna Fáil policies such as the increased funding of the National Treatment Purchase Fund.

Noting there were “a million outstanding patient appointments in health” and a housing crisis, Mr Calleary said Fine Gael had to enter the review with a very open mind.

“They are very sensitive to criticism and they have to leave that sensitivity outside the room and take criticism on board because the criticism is meant to improve what is happening in people’s lives on the ground,” he said. “The criticism is meant to test the policies that they are implementing, to see why they haven’t been delivered and see if they can be changed to deliver. And that’s what the review is about. It is not a political drama.”