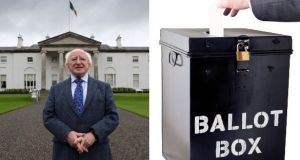 Planning for President Higgins’s campaign is at an early stage will only go up a gear towards the end of the month.

President Michael D Higgins is likely to follow the example of same-sex marriage and repeal the eighth advocates as he seeks a second term, say his supporters.

Sources close to the President say he will also participate in debates and interviews during the campaign.

The question of expenses incurred during the President’s term has also become an issue in recent weeks. But Mr Higgins is said to be reluctant to publish such details, which are outside the scope of Freedom of Information requests.

“Michael D doesn’t like revealing things about his private life,” said one source. “He would be very slow to do that . . . If it comes to the crunch, he may have to, but he certainly won’t be volunteering it.”

Planning for Mr Higgins’s campaign is at a very early stage and will only go up a gear towards the end of the month. But the success of Yes campaigners in the same-sex marriage and abortion referendums is being examined.

Both campaigns were largely led by civic society figures, although senior politicians were also prominent. The forthcoming election will mark the first time since 1966 that an incumbent President will face competition for a second term.

Those close to Mr Higgins, who as the outgoing president will nominate himself and be an Independent candidate, insist he will not follow that model.

“It has never been really done,” said one source. “It is the first time a modern one, an active one, will be done. Michael D will be active . . . He won’t be a wilting violet in the background if there are attacks on him. He won’t be jumping into every dogfight that is there. It will have to be done with some caution and caveats and so on. But he is not going to do a de Valera on it.”

The “balancing act” Mr Higgins will have to perform between his own campaign and his duties will be one of the key considerations in the run up to polling day, likely to be around the end of October.

Fine Gael, Fianna Fáil and Labour are all officially supporting Mr Higgins’s candidacy, but politicians are unlikely to be at the forefront of the campaign. There will also be fundraising.

“There will be some civic campaigns, a bit like the referendum,” the source added. “There is a template there in terms of marriage equality and repeal the eighth in how civic society organised. Marriage equality; repeal the eighth; re-elect the president. A lot of people can be engaged in those campaigns where the President isn’t necessarily involved at all. Political parties can do their own thing.”

Although the scope of any national campaign – such as a tour, campaign rallies and potential postering – is not yet clear, a campaign committee is expected to be formed soon. It is likely to be chaired by a non-party political figure and may include representatives of all the groups supporting Mr Higgins.

However, the National Ploughing Championships, which takes place next month, are seen as one example of where Mr Higgins’s official duties as president will combine with his campaign for a second term.

It is also noted by those close to the President that there are not “any firm structures in place”.

“You don’t want a heavy, structured campaign like for a Dáil election. Michael D is the statesman. By seeking to impose any heavy campaigning structures, all you are doing is diverting attention from his own strengths, which are huge.”