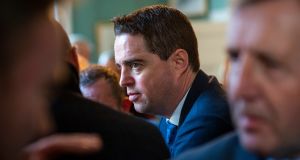 Fine Gael chairman Martin Heydon said it had been agreed that talks should continue with other political parties. File photograph: Douglas O’Connor

An “incorporeal” meeting of the Fine Gael party has given approval to party negotiators to continue government-formation talks with Fianna Fáil.

Talks between both parties – which have reportedly been progressing at a slow pace – were suspended on Thursday to allow the Fine Gael negotiating team seek a mandate to continue negotiations.

Because of social distancing practice necessitated by the coronavirus outbreak, the meeting of the 35-strong parliamentary party was conducted by teleconference for the first time.

In a statement issued on Thursday evening, party chairman Martin Heydon said it had been agreed that talks should continue with other political parties.

“Negotiators will report to party colleagues with developments,” he said.

Taoiseach Leo Varadkar told colleagues at the two-hour meeting that Fine Gael should lead the rebuilding of the Irish economy again, following the hardship and extreme situation that has arisen due to the coronavirus emergency.

Mr Varadkar told a meeting of the parliamentary party the numbers of positive tests for the virus, also known as Covid-19, would continue to rise over coming days. There was a significant spike in the figures on Thursday, with 191 new cases being confirmed in the State.

Mr Varadkar told the meeting there would be big increases in positive cases over coming days with increased testing taking place across the country.

He also said all of Government was pulling together on fighting the virus. On a more general note, he said the effects of social distancing may not be seen for five to 10 days.

He also informed the meeting that the period before schools can reopen might be extended into April or May.

“Party members found the meeting to be very useful where the leader, Ministers, and backbenchers shared experiences and solutions from around the country, hearing of the impact of the virus in terms of health, society and economy,” said Mr Heydon.

Discussions are due to recommence on Friday between the two parties, although the prospects of an early breakthrough has faded. A new government might not be agreed until after Easter, according to sources from both parties.

Last week, the two parties agreed to commence “in-depth detailed talks” in a move that was widely interpreted as signalling a decisive move towards government formation. The Green Party has refused to join the talks, calling instead for a national government. That proposal has been rejected by the three largest parties, including Sinn Féin.