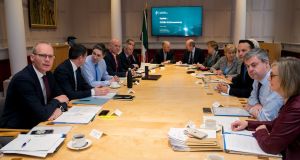 Cabinet subcommittee on Covid-19 at Government Buildings: The political landscape has changed utterly because disputation about economic and expenditure policies have become irrelevant in the face of the likely financial consequences of Covid-19. Photograph: Gareth Chaney

Just as we thought that the general election had created a perfect political storm in which no combination of two of the three largest parties could form a government unaided, we now have a national crisis superimposed on the political crisis.

If we had thought that the annual wave of influenza admissions likely to land in emergency departments at our hospitals amounted to a crisis, we now have to recalibrate the term “crisis” to describe what is happening in Italy and what may happen here.

The chronic shortage of intensive care beds in Irish hospitals must now be seen in the light of what the Italians are doing – converting hospital corridors into intensive care units. At Boris Johnson’s press conference on Monday, it was stated that the UK government were taking steps to buy up respirators. What prospect is there that Ireland will be able to match that effort?

On Sunday I went to have a regular coffee with a friend in south Dublin. It seemed to me that footfall had shrunk to 30 per cent or so at the venue. Anecdotally, it seems that hotels and restaurants are experiencing a similar fall-off in business. Service industries such as cafes, restaurants and hotels depend on cash flow to pay their wages, their suppliers and their Vat, PRSI and PAYE bills.

A continuation of the customer famine for such businesses threatens their viability in a way that a week’s snow storm would not.

The Government announced a large package of big-figure measures to deal with the economic consequences of the Covid-19 crisis. High-level fiscal stimulus is not sufficient by itself. Some relaxation by way of postponement of tax liabilities for highly exposed service sectors will be required as well.

The cancellation of large parts of the St Patrick’s Day Festival will be a body blow to many commercial enterprises, including travel, accommodation and entertainment.

More broadly, Covid-19 has the potential to cause a delay or postponement of many other financial transactions.

Those making public health policy decisions affect economic wellbeing as well. Their responsibility is a very heavy one

Those making public health policy decisions inevitably affect our economic wellbeing as well. Their responsibility is a very heavy one and the capacity to overreact is as fraught with danger as the capacity to underreact.

Cancelling large-scale events will have negative economic and exchequer effects. Not doing so may be seized upon as evidence of nonchalance. In short, we are in a bind.

While it is fortunate that the last budget was predicated on making provision for the economic consequences of a no-deal Brexit, the much-talked about envelope of fiscal space to finance tax cuts or public expenditure increases has evaporated before our eyes.

The political landscape has changed utterly, not merely because of the election result but because areas of disputation about economic and expenditure policies have become irrelevant in the face of the likely financial consequences of Covid-19.

Into this mix comes the suggestion that we should form some kind of national emergency government – presumably on an all-party basis.

The idea seems radical but the question remains whether it is plausible? Would a cabinet of all the senior political figures from across the ideological spectrum be any more adept at good decision-making than a majority government with a narrower political base?

Economic wellbeing depends to a significant extent on the vital element of predictability. A short-term national government would hardly bring predictability into our affairs. The notion that we might have such a government with a short-term mandate to be followed by a general election might simply put everything on hold in large swathes of economic activity and decision-making on investment.

On balance, it seems that the case for a government composed in the main of Fianna Fáil and Fine Gael is now transformed into an imperative. Whether such a two-party arrangement needs the addition of a third party or a number of smaller parties is not yet clear. Fine Gael and Fianna Fáil could put together a national plan and seek to have it supported by a number of the recently elected Independents with which such parties are ideologically compatible.

Independent TDs don’t like early general elections, especially in a climate where their seats would be vulnerable. That fact is part of the laws of physics of representative politics.

If Covid-19 is likely to bring about difficult economics and  public finances, the need for a five-year programme is obvious

My hunch is that there is a workable majority for a government with a national programme provided that the leaders of Fianna Fáil and Fine Gael acknowledge political realities and their own responsibilities. If Covid-19 is likely to bring about a difficult period in terms of economics and the public finances, the need for a five-year programme is all the more obvious.

Apart from the political firefighting entailed in handling Covid-19, the groundwork has to be done in other transformational policy areas including home building, health reforms and urban planning.

The credibility of such a government will depend completely on its capacity to signal to the electorate that it would be united on short-, medium- and long-term policy goals – and on taking immediate steps to implement their achievement.