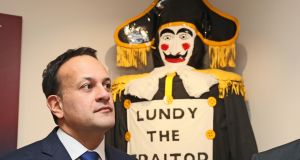 Taoiseach Leo Varadkar during a visit to the association’s Memorial Hall in Londonderry. Behind is an effigy of ‘Lundy’, regarded as a traitor by loyalists during the Siege of Derry in 1689. Photograph: Brian Lawless/PA Wire

A referendum will be held next year to ask whether the right to vote in the presidential election should be extended to Irish citizens living outside the state, the Taoiseach has said.

Speaking at a dinner in Derry on Friday, Leo Varadkar said the next round of referenda was “pencilled in” for the same time as the European and local elections in May 2019.

He was speaking before the results of an Irish Times exit poll which published on Friday, which shows Michael D Higgins is set to be returned as President with a huge majority.

The Taoiseach said there had been a movement to modernise Ireland’s constitution over the past few decades, and it would create an opportunity “to elect a president who will represent not just the state but the whole Irish nation on this island and around the world.”

Acknowledging a reference to the DUP MP Sammy Wilson by a previous speaker at the dinner, the Taoiseach said: “Therefore it is not inconceivable perhaps in seven years’ time that all of you here will have the opportunity to vote for president Wilson, should he put his name forward.”

Voting in presidential elections is currently limited to citizens resident in the Republic of Ireland. If upheld, the referendum would give Irish citizens living in Northern Ireland and around the world the right to vote in the next Presidential election in 2025.